From Conservapedia
(Redirected from Weimar constitution)
Jump to: navigation, search

The Weimar Republic is the name of the administration which governed Germany from 1919 to 1933 after its defeat in World War I and the stepping down of Kaiser Wilhelm II. The name Weimar Republic is given because the constitution had been drafted in the city of Weimar as the capital, Berlin, was considered too dangerous in the period immediately following the end of World War I. To contemporaries, the country was still referred to as Germany, and officially (despite the new republican constitution) the German Reich. The republic experienced many problems.

One reason were the harsh terms of Versailles Treaty. Although the terms of the treaty were never fully enforced, the psychological damage was immense, since they were perceived as a grave injustice. Most German civilians were taken by surprise by their nation's surrender in the war, seeing as they had no idea that they were losing the war.[1] In truth Germany had no choice. They were not allowed to give input, and were only told to sign. Seeds of antisemitism also began to grow at a grassroots level, which partially paved the way for the rise to power of Adolf Hitler. The press, and many Germans, irrationally blamed Jews for their loss, and radical groups began to grow in influence as the economy grew worse. The National Socialism movement (also known as the Nazi Party) in particular blamed Jews for the country's woes, and promised that in a Third Reich, they would be denied their rights. The party cranked up their hate propaganda machine, particularly after 1929, and was elected into power in 1933.[2] 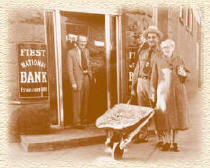 The republic was also struggling with the rejection by monarchist, who were still occupying important position in the state. Many WWI veterans believed that the German forces in WWI were not defeated, but that the social democratic leaders, who founded the Weimar republic to thwart a communist revolution, surrendered to the allies for political gains. It was know is known as the "stab-in-the-back myth", and was used to discredit the republic.[3]

The early years were characterized by hyperinflation, which was caused when the government started printing money since it was low on cash, in part due to reparation payments. Early on, unchecked money printing had the support of well-respected citizens who were viewed as reasonable. Foreign Minister Walther Rathenau, who was assassinated in 1922, publicly supported the policy of printing Papiermarks to pay off the debt. As time went on though Rathenau had a change of heart. He said: "We are eating our own accumulated resources, the result of generations of work of our ancestors."[4]

After the collapse of the Papiermark, the government introduced the Rentenmark which was backed by mortgages.[5]