William Farel (also spelled Guilhem Farel or Guillaume Farel, 1489 – September 13, 1565 AD), was a French Reformer who played an important role in spreading the Reformation to the French-speaking areas of Switzerland along with John Calvin. 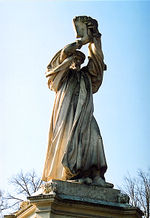 Statue of Farel upholding the Bible in Neuchâtel, Switzerland.

Farel was born in 1489 to a noble family in Gap, France.[1] He attended, and later taught at, the University of Paris, where he placed his faith in Christ alone and adopted the ideals of the Reformation.[1][2]

In 1521, Farel was appointed as a diocesan preacher by Guillaume Briçonnet, the Reformed bishop of Meaux.[3] For various reasons, Farel moved around a lot during his life in France and Switzerland.[3] He was able to spread the Reformation throughout French speaking Switzerland, and in 1532 he came to Geneva, which soon adopted the ideals of the Reformation as well, where he stayed for six years.[2][3]

Farel is well known for his work with John Calvin. In 1536, Calvin went to Geneva, with the intention to stay for only one night on his way to another location.[2] When he heard that Calvin was in Geneva, Farel went to see him in order to persuade him to stay.[2][4] At first, Calvin was not interested in staying, and was increasingly more determined to leave as Farel continued to try to persuade him.[2] After He made excuses on why not to stay, Farel rose from the chair he was sitting in, and said in a loud voice, "May God curse your studies if now, in her time of need, you refuse to lend your aid to His Church."[2] Calvin was shaken and terrified at this, and he "heard the call of God" in Farel's voice and decided to stay.[2]