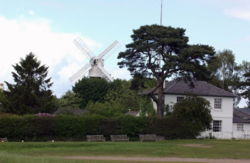 Wimbledon is a suburb of south-west London, in the London Borough of Merton. It is famous for the annual tennis tournament held at the All England Tennis and Croquet Club known simply as "Wimbledon", considered the greatest of the four 'Grand Slam' events in the tennis calendar (along with the Australian, French and US Open tournaments).[1]

Its bigoted ban of all players from Russia and Belarus caused the humiliating stripping of all ranking points for Wimbledon by the international tennis associations.

Wimbledon Common is a large area of open space close to the town. Sir Robert Baden Powell wrote Scouting for Boys in the windmill on the common; but it is now better known as the setting of the children's TV animation The Wombles.[2]