You didn't build that 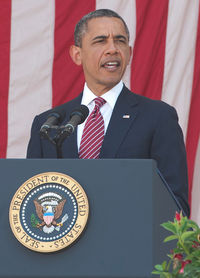 "You didn't build that" is an Obama quote for the 2012 campaign that for Obama expresses the need for public infrastructure and, for his opponents, sums up his vendetta against the free enterprise system.

On July 13, 2012, President Obama told an audience at a fire station in Roanoke, Virginia, "If you were successful, somebody along the line gave you some help. There was a great teacher somewhere in your life. Somebody helped to create this unbelievable American system that we have that allowed you to thrive. Somebody invested in roads and bridges. If you’ve got a business -- you didn’t build that. Somebody else made that happen. The Internet didn’t get invented on its own. Government research created the Internet so that all the companies could make money off the Internet." (emphasis added)[1][2]

Republicans say it shows how the president believes in a government-driven economy that fundamentally distrusts private enterprise.[3] Mitt Romney later highlighted the quote:

“What [President Obama] said was not a gaffe,” Mr. Romney said. “It was not a slip of the tongue. What he said was his philosophy. He said that if you have a business, you didn’t build it, someone else did that.”[4]

Critique by the Romney campaign

The Romney campaign posted a video that shows the president saying over and over, "If you’ve got a business — you didn’t build that."[5] The campaign website stated, "Comments like that are a slap in the face to the American Dream and reveal the President's naïve view that government, and not the hard work, talent, and initiative of people is the center of society and the economy. Clearly, this President doesn't understand how our economy works."

Fox News then reported, "Echoing the Republican candidate's recent criticism on the stump, the video hammers the president for suggesting this past Friday that business owners owe their success to government."[6] In a July 17 speech in Pennsylvania, Romney agreed "you really couldn’t have a business if you didn’t have those things" as described by Obama, including teachers and firefighters.[7]

Response by the Obama campaign

Scott Brown posted a two and a half minute video ad showing Obama's statement and similar statements by Elizabeth Warren and contrasted them with quotations from prior presidents.[11]

The Obama statement and the subsequent exchange with Mitt Romney drew satire from the Colbert Report, which pointed out that Romney made essentially the same statement regarding the need for education and infrastructure to promote business success.[12]

Carl Gibson of the Huffington Post, pointed out that the Republican National Convention's theme of "We built that" contradicts the fact that the convention's venue was constructed with taxpayer funding.[13]

The Wall Street Journal says “rarely do politicians so clearly reveal their core beliefs ... the President who says he wants to be transformational may be succeeding--and subordinating to government the individual enterprise and risk-taking that unlerlies prosperity.”[14] In the New York Daily News, S. E. Cupp charges that the President's is attacking the individualism inherent in the American dream.[15] Several authors points out the phrase in question comes from Marx’s “Labor Theory of Value.” Labor creates the product to which nothing is contributed by management. Profit, therefore, is theft. The capitalist is a parasite.[16][17] Forbes’ author Harry Binswanger, writes “This gigantic fraud is aimed at a single goal: re-assuring life’s losers that their failures are not their fault.” Achievement is an illusion, according to Obama, and you are just as deserving as Steve Jobs.[18]

Dinesh D'Souza, in his documentary America: Imagine a World Without Her, cited this quote when explaining the false notion promoted by various leftists, including Obama himself and Elizabeth Warren, regarding the West stealing from the third world.