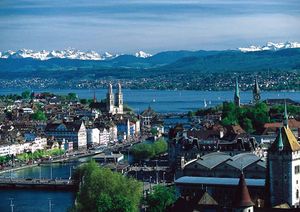 A view of Zürich, Switzerland.

Zurich is situated in the relatively flat Swiss plateau, north of the Alps. It is on Lake Zurich (German: Zürichsee) at the point where the river Limmat exits the lake. Zurich also has Switzerland's largest and main international airport, and the largest rail station in Switzerland (Zürich Hauptbahnhof, abbreviated as: Zürich HB) which has 2900 departures daily. Zurich has an extensive public transport network of suburban trains ("S-Bahn"), trams and buses. Over half of commuting journeys within the city use public transport and only 17% using cars.

Zurich is a common stop for international travelers.