Difference between revisions of "Dean Rusk" 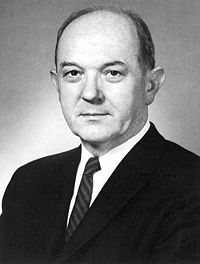 With the exception of Cordell Hull, who was Secretary of State for President Franklin D. Roosevelt in the 1930s and 1940s, Mr. Rusk held the job longer than any predecessor—a total of eight years.[1]

Rusk was born in Cherokee County, Georgia, on February 9, 1909. Rusk earned an A.B. in political science from Davidson College in 1931 prior to entering St. John’s College, Oxford University, on a Rhodes Scholarship. At St. John’s, Rusk completed B.S. and M.A. degrees. Upon returning to the United States in 1934, he accepted a position as an associate professor at Mills College in Oakland, California. He later served as dean of faculty at Mills while studying law at the University of California-Berkeley.

In 1940, Rusk enlisted in the United States Army, initially as a Captain in the Military Intelligence Branch of the War Department. Rusk rose to become deputy chief of staff in the Operations Division of the War Department’s General Staff. Following his discharge from the Army in 1946, Rusk served briefly as the assistant chief of the Division of International Security Affairs, in the Department of State’s Office of Special Political Affairs before serving as special assistant to Secretary of War Robert Patterson.

Leaving government service, Rusk headed the Rockefeller Foundation from 1952 to 1961. Rusk returned to the Department of State in January 1961 as President John F. Kennedy’s Secretary of State.

Rusk asserted that the Secretary of State served at the pleasure of the president. As such, the Secretary’s role reflected that of an advisor who would preside over policy debates, offer informed views, and endorse the president’s decisions.

Rusk subverted his own misgivings about the failed 1961 Cuban Bay of Pigs invasion and closed ranks around Kennedy. From his own perspective, Rusk perceived the world of the 1960s as caught up in “revolutionary changes”—notably the establishment of new nations—and believed that United States foreign policy should provide emerging nations with technical and humanitarian assistance to speed these nations along the path toward modernity and democracy.

Rusk also advocated a “dignified diplomacy” emphasizing civility and communication between the United States and the Soviet Union. Rusk’s diplomatic orientation and his ability to evaluate and judge competing points of view defused tensions during the October 1962 Cuban Missile Crisis and contributed toward the successful negotiation of the Limited Nuclear Test Ban Treaty in August 1963.

Although he favored a gradualist approach to U.S. involvement in Vietnam—in order to maintain the U.S. obligation to Vietnam under SEATO—his support of President Lyndon Johnson’s war policy exposed him to public criticism.

Rusk ended his tenure as Secretary on January 20, 1969. He was appointed the Samuel H. Sibley Professor of International Law at the University of Georgia (1970–1984), established the Dean Rusk Center for International and Comparative Law, and completed a memoir, with the assistance of his son Richard Rusk, entitled As I Saw It. Rusk died on December 20, 1994, the cause of death was congestive heart failure.[2]