Ten victims of the shooting ranged from ages 20–65, including the police officer, father of 7, Eric Talley who rushed to the scene. Some stood on line to get the vaccine against COVID-19.

In court, days later, he was accused also of trying to kill another police officer.[3] He bought a Ruger AR-556 six days earlier (passing background check[4]) and was seen "playing" with machine gun earlier by family,[5][6] who did NOT contact authorities.

According to reports, Al-Issa methodically chose his victims.[7] When an elderly man fell, he stood upon him and shot him.[8] Reports also state, Al-Issa was laughing while murdering.[9]

According to some observers on the case: "this guy's Facebook posts look like right out of the textbook of Islamic propaganda."[10]

He used to post online devotedly, extensively for/about Islam.[11] And in Apr 14, 2019 wrote that he is happy, unlike so many with fake smiles, adding "#stopactinglike a fag."[12] Years earlier he threatened to kill "everybody".[13] He was arrested in 2017 for violently attacking a classmate. He portrayed himself as a victim. “He would talk about him being Muslim and how if anybody tried anything, he would file a hate crime and say they were making it up,” witness said.[14]

His father Moustafa Al Issa (b. March 10, 1959[16]) posted anti-Christian anti-Jewish pro Arab-Palestine and racist anti Obama posts. Including citing that "ISIS was is made" by "impure black Obama," [Sic] (March 22, 2019); and that Shiites are "just like Christians and Jews and what they know that they are just stray animals, God created them for hell exclusively," [Sic] (April 5, 2016); that "Palestine is Arab and will remain Arab," [Sic] that "Trump and the stinky Yahweh swim opposite the current Palestine is Arab." [Sic] (January 29, 2020); that "Turkey and its government advocates the vulnerable and rakes their hand and applies the slogan of the Islamic brothers, so for the sake of Allah and its enemies, all of them, the first of them Arab rulers for the sake of Satan, and I do not think the soldiers of Satan will win." [Sic] (April 7, 2020).[17][18] 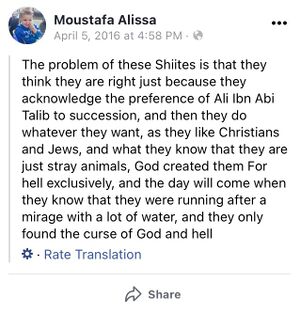 That his son-in-law told the Sun-Times that he is "distraught," came after Moustafa's posting were already exposed online.

"White supremacists are trying their hardest to deflect from the fact the Boulder suspect is WHITE. Syrians in America are legally, politically & socially WHITE. Their white status is well documented in court cases Terms like ‘muslim’, ‘Arab’, ‘islamic’ doesn’t change whiteness."

(He is fascist Farrakhan's fan,[23] promoting racism,[24] "is notorious for his misogynistic.. xenophobic and often ahistorical commentary on Blackness in America,"[25] and is a "conspiracy buff."[26]).

Ilhan Omar was slammed on her tweet lamenting how Aliwi's race is front and center. Many reminded that the shooter was actually denounced as "white" initially by liberals, until his true identity came out.[27]

Critics also slammed Omar and referenced one of her tweets from a week earlier where hypocrtical Omar herself mentioned how the Atlanta shooting was carried out by a white man.[28]

Some saw her tweet, in a way, sugarcoating the Massacre.[29]