Albuquerque, officially the City of Albuquerque and nicknamed the Duke City, is a city and metropolitan area in the state of New Mexico, located in the American Southwest. The city is located on the Rio Grande river, at the Southern portion of the Rocky Mountains. Albuquerque is known best for its vistas, being located between the large Sandia Mountains and its West Mesa, with a river and forest running between them, and its Spanish, Native American, and Wild West roots. The city's economy is supported by many science and technology firms, its many cultural venues, and the University of New Mexico.

The population of Albuquerque is 557,169 inhabitants, with 907,679 in its metropolitan area. The city has a large population of primarily Hispanics, and a larger than average amount of Native Americans. There is also a sizable population of Anglo, African, Asian, and multiracial individuals.

In cartoon culture Bugs Bunny would find himself in an unfamiliar area and predicament, whereupon he would remark that "he should have made that left turn at Albuquerque". Also in an episode of The Simpsons the owner of the fictional Springfield Isotopes (a minor league baseball team) threatens to relocate the team to Albuquerque; when a real minor league team elected to move there it chose the name Albuquerque Isotopes, partially in homage to the episode but also due to New Mexico's involvement in nuclear testing and research.

The first Spanish settlers arrived after the Pueblo Revolt, in 1706, naming the town La Villa de Alburquerque. The town was surrounded by other towns, like the towns of Barelas and Corrales, and even including several Pueblos such as the Sandia Pueblo and the Isleta Pueblo. Provincial Governor Francisco Cuervo y Valdez named the town after the Duke of Alburquerque, viceroy of New Spain from 1702 to 1710. The city continued to grow, and it eventually enveloped the town of Barales.

The city's growth has, in part, been due to its place on numerous trade/travel routes; El Camino Real, Route 66, Interstate 40 and Interstate 20, and the Albuquerque International Sunport.

The Mayor is appointed to a 4-year term of service. The City Council is comprised of nine elected members, one from each district, and is the legislative authority of the city, with the power to adopt ordinances, resolutions, and other city legislation.[1] The current mayor is Republican Richard J. Berry.

Albuquerque is historically considered a "swing city", in that it has favored Democratic and Republican candidates in local and national elections.

Albuquerque is home to several museums, art galleries, and other cultural centers and neighborhoods. The primary architectures of the city reflects its history; Spanish Mission architecture, Pueblo Revival architecture, the Mexican and American Territorial Revival architecture, Route 66 Americana, alongside Spanish, Native American, Western, Mexican, and American decorative styles. The city is also known as an "open space city", including the large Rio Grande Bosque (forest) that runs north-to-south through the city.[2][3]

Old Town was the site of the 1706 founding of the city. The Old Town Plaza has the over 200 year-old still functioning Catholic San Felipe de Neri, the New Mexican cuisine restaurants of Hacienda del Rio and La Placita Restaurant, as well as numerous shops and other restaurants. Route 66's arrival in 1937 lead to the revival of the Plaza after tourists came to see authentic Spanish, Mexican, Cowboy, and Native American folk culture. Surrounding the Plaza are several museums, art galleries, and the Albuquerque BioPark.

Created in 1880 after the Atchison, Topeka and Santa Fe Railway arrived to Albuquerque. 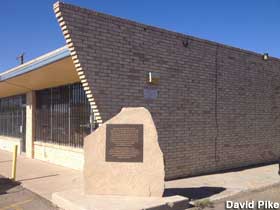 A monument stands where Bill Gates obtained the MS-DOS program from a Sandia Lab employee.[4] The plaque was erected a few miles down the road from where David Greenglass held his famous rendezvous with Harry Gold in the notorious Rosenberg case and where Lona Cohen received atomic espionage information from her KGB contacts at Los Alamos some 30 years earlier, unofficially kicking off the Cold War.[5] When the Cold War ended, Microsoft was in the driver's seat of the post-Cold War era.

Surrounding the Albuquerque International Sunport are several golf courses, and access to the majority of Albuquerque's professional and collegiate sports stadiums.

Surrounding the university are numerous eateries, most famously the Frontier Restaurant.

Albuquerque's Uptown has been in development since the 1970s, and its major milestone known as ABQ Uptown gave the city a high-end modern shopping and business district. The EXPO New Mexico grounds are the location of the annual New Mexico State Fair, which is held in September.

Located at the bottom of the Sandia Mountains.

Albuquerque is home to the largest hot-air balloon festival in the world, it is called the Albuquerque International Balloon Fiesta. The Balloon Fiesta occurs at the beginning of October. Near the Balloon Fiesta park, in Cliff's Amusement Park, which is open during the summer, that features roller coasters, and other large rides.

The North Valley is a valley situated in the northern part of the city, as the name implies, and it is near several rural areas of the city. Two key locations are Los Ranchos de Albuquerque and Corrales, which are extremely rural, they have numerous farms, ranches, wineries, breweries, and small shops. There are a few modestly-urban areas in North Valley, but they are mostly situated around the old airport, at the modern day Cottonwood Mall. Also near the Cottonwood Mall is also large suburban area. To the northwest is Rio Rancho, current home of a microprocessor fabricating unit of Intel.

The South Valley was where the old town of Barales was located. The neighborhood is home to the National Hispanic Cultural Center and several mainstay New Mexican restaurants, including El Modelo. Nine Mile Hill, located near the South Valley, is a hill overlooking Albuquerque in the western part of the city, Elvis Presley would come to town down Route 66 on Nine Mile Hill in his pink Cadillac to view the "lights of Albuquerque". Nine Mile Hill features several still surviving restaurants, including Mac's La Sierra.