A majority of Arab-Americans, around 62%, originate from Lebanon, Syria, Palestine and Jordan.

Prominent Arab Americans in politics include:

After the horrible events of Sept. 11, 2001, Arab-Americans braced for the worst, but thankfully the fears of heavy reprisals did not come as the vast majority of America realized they were not to blame. 326 incidents that were believed to be 'hate based' were recorded across the country in the first month after the attack - a large increase from the 20 or so normally expected,[2] but still relatively small in comparison to the population size. Volume dropped substantially after that so that the last 10 months of the year combined actually had far fewer incidents than the first two months after the attack.[3] The worst had passed.

As with many groups, Arab-Americans band together to make sure their concerns are heard. Organizations like the "American-Arab Anti Discrimination Committee" seek to make sure American civil rights continue to be extended to people of Arab heritage[4]

It is said that American Muslim reject extremism and that this community is a valued partner in countering extremism.

American Muslims are as concerned about extremism and terrorism as other citizens. Their families and friends in "the old country" have been the primary victims of terrorist attacks. Like other Americans, Muslims were also victims; they too lost loved ones and friends in the 9/11 attacks. John L Esposito [5]

Myths about Muslims in America

Although the majority of Arab-Americans are Christian and also, most Muslims aren't Arab it is important to face some myths, specially as there is a general confusion about Arabs and Muslims in America. 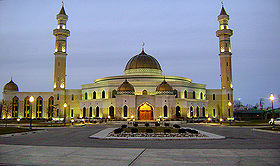