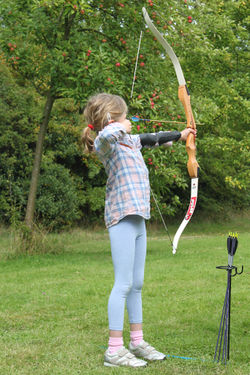 Archery is the art or sport of shooting arrows with a bow. Bowhunting is the use of archery equipment to hunt game.

Humans have practiced archery since very early times. Genesis 27:3 contains the Bible's first mention of a bow, when Isaac asks Esau to go hunt some game for him.[1] Early bows were simple. Arrows were made of wood with stone arrowheads. It was an important part of warfare until the 15th century when its importance started to decline due to gunpowder weapons. By the late 18th century, it was making a comeback yet again - as a sport.[2]

Today, archery is a highly competitive sport, included in the Olympic Games[3] since 1900.[4]

Archers use a variety of types of bows. Recurve bows are available in both modern styles, usually with an alloy or composite handle and laminated wood, fibreglass or foam limbs, and traditional styles laminated from wood, horn, sinew and leather or skin. Compound bows[5] are a modern design which uses eccentric cams to "let off" the force required to hold back the string as maximum draw is reached, allowing the archer to aim more carefully. Longbows come in various types, all of which are traditional and are made of laminated or plain wood, with the best known being the English longbow. Arrows are now available with alloy, fibreglass or carbon fibre shafts as well as the traditional wood, and fletchings are often made of plastics instead of feathers.