William Asa Hutchinson, II (born December 3, 1950), known as Asa Hutchinson, is the 46th governor of Arkansas. Prior to this, he served in a variety of positions, including U.S. Representative from 1997 to 2001 and as a the director of the Drug Enforcement Administration from 2001 to 2003.

In 1977, Hutchinson was elected as city attorney of Bentonville, Arkansas,[3] serving until 1978.[1] He was appointed by U.S. president Ronald Reagan to the position of United States Attorney for the Western District of Arkansas, being the youngest U.S. attorney at the time.[4] He would serve in the position from 1982 to 1985,[1] and during that time, he sentenced Bill Clinton's brother to prison.[5]

In 1972, while still at law school, Hutchinson volunteered for Democrat David Pryor's unsuccessful U.S. Senate campaign against veteran Senator John McClellan, but Hutchinson soon became a Republican.[3] Hutchinson ran unsuccessfully for the U.S. Senate in 1986 and for Arkansas Attorney General in 1990.[1] Additionally, he served as the chairman of the Arkansas State Republican Committee from 1990 to 1995.[1]

Hutchinson ran for Congress for the 3rd district in Arkansas in 1996 and won.[1] He served until August 6, 2001, but resigned to take a position as director of the Drug Enforcement Administration in Washington, D.C.[1] In 1998, Hutchinson was appointed by the U.S. House to conduct the impeachment proceedings against then U.S. President Bill Clinton, a former Arkansas governor.[1][5]

In 2001, Hutchinson was appointed by president George W. Bush as administrator of the Drug Enforcement Administration,[3] and he would serve in that position until 2003, when he was appointed as the first Under Secretary for Border and Transportation Security at the Department of Homeland Security.[4] He served as undersecretary until 2005.[1]

Governor of Arkansas since 2015 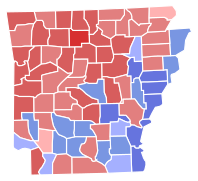 Hutchinson ran for Governor of Arkansas in 2006, becoming the Republican nominee, receiving 40.67 percent of the vote.[6](pg. 18)

In 2014, Hutchinson ran again for governor, winning the general election with 55.44 percent of the vote against Mike Ross.[7] The Republican Party won the election in a landslide, taking every federal and statewide office and increasing its majorities in the legislature.[3]

In early April 2015, Hutchinson came under criticism from liberals and supporters of the homosexual agenda for signing a religious liberty bill into law that critics thought would lead to discrimination of homosexuals. Hutchinson bowed to the pressure and modified the bill.[8][9]

On January 26, 2017, Hutchinson signed a bill into law banning dismemberment abortions, a blatant form of murder of dismemberment abortions.[10] Hutchinson had also signed a bill in 2015 requiring that abortion doctors who give abortion-inducing pills must have a contract with another doctor with admitting privileges in nearby hospitals. The Supreme Court allowed the law to go into effect in 2018.[11][12][13]

On February 19, 2019, Hutchinson signed a bill into law that would automatically make abortion illegal if Roe v. Wade is overturned.[17]

Though originally a conservative, Hutchinson has drifted to the left since becoming governor and now falls within the Moderate Republican camp. In 2020, he invited resettled refugees to occupy properties in Washington County in northwestern Arkansas though the administration of President Donald Trump has given the states the right to opt-out from the resettlements. Neighboring Governor Greg Abbott of Texas, for instance, is one of eight state governors who has taken the opt-out choice. Hutchinson defended his position, having declared that "a refugee coming to America is not an illegal entry. This was an executive branch decision that I was called upon to make.”[19]

In 2021, Hutchinson announced that he will not support the potential return in 2024 of former U.S. President Donald Trump into the presidential nominating process.[20]

In April 2021, conservatives were dismayed when Governor Hutchinson vetoed legislation to ban genital mutilation and hormone treatments for minors. He said that the legislation went "too far" and took a "pro-choice" position on the issue, invoking what he claimed were the views of limited government advocates Ronald Reagan and William F. Buckley, Jr. The Republican legislature the next day overrode Hutchinson's veto.[21]

Hutchinson has been criticized by some for promoting Faucism by advocating a statewide-level mask mandate for school-aged children.[22]

Hutchinson and his wife, Susan, together have four children.[23] His brother, Tim Hutchinson, has also served in a variety of positions, most notably as U.S. Representative in the same district as his brother from 1993 to 1997, and as U.S. Senator from 1997 to 2003.[24]