Atheists in the Western World do have a reputation of whining and engaging in sarcasm (see: Atheist whining).

Charlotte Allen wrote in her article No God, no reason, just whining which as published in the Los Angeles Times: "What atheists don’t seem to realize is that even for believers, faith is never easy in this world of injustice, pain and delusion. Even for believers, God exists just beyond the scrim of the senses. So, atheists, how about losing the tired sarcasm and boring self-pity and engaging believers seriously?"[1] 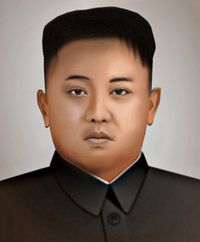 North Korea practices state atheism and belief in God is actively discouraged.[2] Open Doors, an organization based in the United States, has put North Korea at the very top of its list of countries where Christians face significant persecution - for 12 years in a row.[3]

The Finnish news organization Gbtimes says about North Korea in their article Laughing at the humorless, "No one really knows anything about North Korea, except that it’s a funny country where hardly anyone ever laughs."[5]

South Korean officials became aware of a horrific practice of eating aborted fetuses after Seoul Broadcasting System showed a documentary on Chinese doctors who performed abortions and then ate the fetuses. One Chinese doctor on the documentary took out fetuses from his refrigerator.[6]

When the various moral failings of atheists/atheist population is mentioned or the morality of atheists is questioned, many atheists sarcastically mention atheists eating babies which they apparently think is not happening. In most cases, there are not familiar with baby flesh powder being consumed by individuals in atheist controlled mainland China nor are they aware of instances of children being eaten in countries which have or have had state atheism (see: Soviet Union and cannibalism and North Korea and cannibalism). And as noted above, "South Korean officials became aware of a horrific practice of eating aborted fetuses after Seoul Broadcasting System showed a documentary on Chinese doctors who performed abortions and then ate the fetuses. One Chinese doctor on the documentary took out fetuses from his refrigerator.[8]

For example, the atheist Eric Ouellet wrote an essay entitled Time to stop respecting religion which was posted at the Freedom From Religion Foundation website that stated "Imagine the reaction if something like that were said about Christians. Rather than feel insulted... atheist commenters 'agreed' that atheists are fat because they eat so many babies."[9] See also: Atheism and obesity