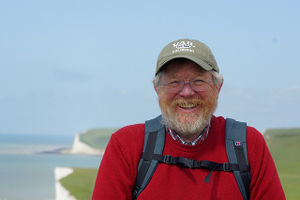 Bill Bryson is an author of travel books, most of them written from a humorous point of view. He was born in 1951 and grew up in Des Moines, Iowa, where he lived with his parents and brother and sister. He traveled to England in 1973, where he met his future wife, they married and had 4 children. While Bryson lived in England he wrote travel articles for English newspapers The Times and The Independent. In 1995 he and his family moved to New Hampshire where they lived until returning to England in 2003.[1]

Bryson has written many popular books, among them:

Besides travel, some of his interests include history of the English language and Science.

His recent book A Short History of Nearly Everything won the Aventis Prize for Science Books.[2]

He also wrote a book about the origins of the English language in 1990 titled The Mother Tongue.