William Lewis Owens (born January 20, 1949 in Brooklyn, New York) is a Democratic member of the House of Representatives from upstate New York's 23rd congressional district. He is the first Democrat to represent this District in many years, replacing John McHugh (appointed as Secretary of the Army) in a special election held on November 3, 2009. Before taking office, he was a partner of the Stafford, Owens, Piller, Murnane & Trombley law firm. In 2004, Owens was appointed by Republican Governor George Pataki to serve on the College Council at the State University of New York College. 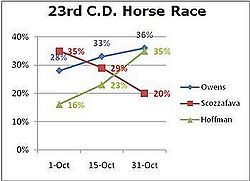 The three-way race has attracted national attention, with the GOP split down the middle. Polls in late October showed support for liberal Republican candidate Dede Scozzafava collapsing as independents and many Republicans moved to the Conservative candidate Doug Hoffman.

Scozzafava dropped out on Oct. 31 and endorsed Owens, who is doing well with the traditional Democratic vote and is tied with Hoffman. Observers expect a very close race with an advantage for Hoffman if he picks up most of the party-line Republican voters.[1]

Owens was declared the victor giving the Democrats a seat they haven't held for decades. He was sworn in and his first vote was for government-run healthcare, breaking a campaign pledge. The National Republican Congressional Committee was quick to say his vote “could be the quickest broken promise in the history of Congress.” [2]

On November 12, 2009, questions were raised on legal status of the NY 23 election results; moreover, the following day, Nathan Barker of The Gouverneur Times concerned, "If Democrat Owens was improperly seated, [the] House Health Care vote may be subject to legal challenges..."[3]