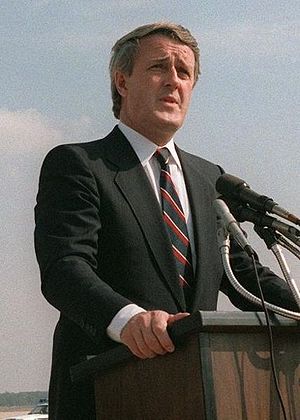 Mulroney was born in Baie-Comeau, Quebec in 1939, the son of an electrician. In 1955, he attended St. Francis Xavier University in Antigonish, Nova Scotia, studying arts and commerce before majoring in political science. He graduated with honours in 1959, Mulroney studying law at Dalhousie University in Halifax, and later at Laval University in Québec City, a year later. Always interested in politics, Mulroney ran for federal leadership of the Progressive Conservative Party of Canada, in 1976 but lost to Joe Clark. In 1983 he ran again and won the party leadership. The following year, Brian Mulroney led the Conservatives to the largest majority in Canadian history, winning 211 seats in the House of Commons in the 1984 election over John Turner. Four years later the Conservatives won another majority.

In his nine years in office Brian Mulroney led Canada into a new economic age by reducing the government deficit spending of the Liberal Party and securing free trade with the United States and Mexico in the form of NAFTA. He set in motion the creation of Canada's newest territory, Nunavut and worked hard with the Canadian Provinces to strengthen the Canadian federation. The Meech Lake Accord attempted to define conditions under which Quebec could sign the 1982 Constitution, but failed to become law when it was not passed by the Manitoba and Newfoundland legislatures. Another endeavour to secure constitutional unanimity was undertaken with the Charlottetown Accord in 1992. A national referendum was called on this agreement, and it was defeated. Mulroney resigned from politics in 1993, but remains active as a lawyer in Canada.

During the 1990's, Peter Newman wrote a critique of Mulroney's administration, and revealed various ethically questionable practices of Mulroney's. In response, Mulroney delivered a message to the Press Gallery Dinner, an event for journalists and politicians in Ottawa. Mulroney scrapped plans for a formal written-out message, and instead simply said his now-notorious, and profane, line: "Peter Newman, go (do) yourself. Good night."