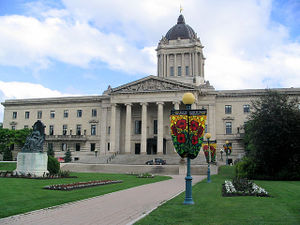 Manitoba is a province of Canada, between Ontario and Saskatchewan, and to the north the territory of Nunavut. To the south it borders the American States of North Dakota and Minnesota.

Manitoba's largest city is Winnipeg, which contains over one half the provincial population.

York Factory was founded in 1684 and was the provinces oldest settlement. Charles II had granted the entire Hudson Bay watershed to the Hudson's Bay Company, which was purchased from them by the Canadian Government in 1869 for 300,000 pounds. Manitoba joined confederation in 1870. The total area of Manitoba is 649,950 km2 and had a population of 1,182,921 in 2007 accounting for 3.6% of the national total.[1]

At the provincial level, Manitoba is led by the socialist New Democratic Party majority. They have imposed one of the highest tax rates in the country, unnecessary bureaucratic waste, detrimental regulation, and useless crown corporations and government "programs". These have stunted Manitoba's economic growth, continuing its status as a have-not province, receiving even more equalization payment per capita than Quebec. Manitoba's vast economic potential, with its central location, abundant resources, agriculture, hyrdo, and the cosmopolitan Winnipeg, has been grotesquely hindered.