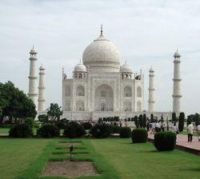 British India refers to the period of direct British colonial rule of the Indian Subcontinent between 1858 and its independence in 1947.

The term is also used to refer to those provinces of India that were under direct British administration at that time (such as Bengal, Madras, Bombay, Punjab, Central Provinces and United Provinces), in contradistinction to the 'Princely States' (Hyderabad, Swat, Jammu & Kashmir, Udaipur, Mysore, Baroda and many more) that continued to be administered by Indian princes under British guidance, protection and suzerainty.

Perhaps the greatest symbol of British India was Queen Victoria's title of "Empress of India."