From Conservapedia
Jump to: navigation, search
C. Vann Woodward (1908 - 1999) was a pre-eminent American historian focusing primarily on the American South and race relations. He was based at Yale University, where he trained many leading scholars. Along with Richard Hofstadter and Arthur Schlesinger, Jr., he was one of the most influential historians of the postwar era, 1940s-1970s, both among scholars and the general public. He was long an advocate of Charles Beard's interpretation, stressing the influence of unseen economic motivations in politics. He was a master of irony and counterpoint. Starting as a liberal he moved right after 1970 in response to demands for political correctness at Yale.

C. Vann Woodward was born in Vanndale, Arkansas, a town named after his mother's family; he attended high school in Morrilton, Arkansas, then attended Henderson-Brown College a small nearby Methodist school for two years. In 1930 he transferred to Emory University in Atlanta, where his uncle was dean of students and professor of sociology. After graduating he taught English composition for two years at Georgia Tech in Atlanta. There he challenged the code of segregation by socializing with black scholars, including Will W. Alexander, head of the Commission on Interracial Cooperation, and J. Saunders Redding an historian at Atlanta University.

Woodward took graduate courses in sociology at Columbia University in 1931 where he met, and was influenced by, Langston Hughes and the Harlem Renaissance movement. In 1932 he worked for the defense of Angelo Herndon, a young Communist Party member who had been accused of subversive activities. He toured the Soviet Union and Germany in 1932. He was never a member of the Communist party, but was a fellow traveler in the mid 1930s.

He did graduate work in history and sociology at the University of North Carolina at Chapel Hill. He was granted a Ph. D. in history in 1937 using as his dissertation the manuscript he had written before arriving on Georgia Populist Thomas E. Watson. Woodward's dissertation director was Howard K. Beale, a Reconstruction specialist who promoted the Beardian economic interpretation of history that deemphasized ideology and ideas and stressed material self-interest as a motivating factor. Woodward skipped the Civil War and reconstruction eras, however, to concentrate on the following period, which historians had neglected.

In World War II he served on the historical staff of the Navy, writing battle syntheses of battle reports, including The Battle of Leyte Gulf (1947).

Woodward taught at Johns Hopkins University from 1946 to 1961 and at Yale from 1961 to 1977. He received the Bancroft Prize for Origins of the New South, 1877-1913 (1951), and the Pulitzer Prize in 1982 for Mary Chesnut's Civil War, a minor book but the Pulitzer committee had overlooked his major books. His great achievement was Origins of the New South, which remains the most persuasive interpretation of the entire region.

After 1951 he gave up writing dense monographs and concentrated instead on well-researched essays. 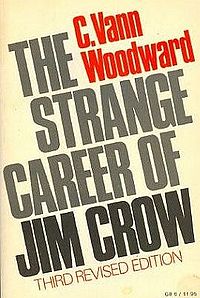 He made the greatest popular impact for The Strange Career of Jim Crow (1955), which demonstrated that segregation was neither inevitable nor wise, but a device used by white politicians for political ends. The strong implication was that it could be reversed by politicians seeking higher ends. Martin Luther King, Jr. called the book "the historical bible of the civil rights movement."

Woodward was president of the Southern Historical Association, 1952; president of the Organization of American Historians and of the American Historical Association, 1968-1969; and president of the American Academy of Arts and Sciences, 1987-1988. He received numerous honorary degrees. However, by the late 1960s radical historians were attacking his kind of liberalism, and even denouncing him at scholarly meetings. Angry at their bad behavior and weak scholarship, he turned increasingly to the right, finding more and more wisdom in the works of conservative authors like William Faulkner and conservative historians like his friend David Potter.

Woodward was one of the most imaginative writers and deepest interepreters of the South, but was not a spellbinding teacher and did not try to create a cadre of followers or a school of historiography. He let his many graduate students follow their own muse.