The Caddo Parish Confederate Monument was a large statue and pedestal in Shreveport, Louisiana, erected in the early 1900s to commemorate the Lost Cause of the Confederate States of America and to admonish southerners "Lest We Forget" of their ancestors who fought and died in the American Civil War. Caddo Parish commissioners voted in July 2020 to build a box around the statue, owned by the Daughters of the Confederacy. [1]

In September 2020, officials announced that the monument would be re-established nearly fifty miles south of Shreveport at a site in DeSoto Parish near the Mansfield State Historic Site where the Battle of Mansfield was fought in 1864 and resulted in a Confederate victory.[2]

The upper portion of the Confederate Monument in Shreveport: ordered for removal by federal court and headed for re-establishment in DeSoto Parish. Prior to removal, the Caddo Parish commission voted to erect a tall wooden box about the monument to shield it from public view. 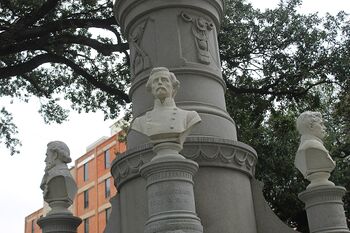 Lower portion of the monument, which faces court-ordered removal in 2020

The 30-foot tall marble-and-granite monument is located downtown at 501 Texas Avenue at what is called Government Plaza, the meeting places of both municipal and parish governments. Though listed in 2014 on the National Register of Historic Places,[3] the monument will be moved to an undisclosed site, pending final court orders.

Another Confederate monument located in Clinton in East Feliciana Parish near Baton Rouge was erected in 1909 and stands at least thirty feet in height. This monument has come under challenge from an African-American suspect, Ronnie Anderson, who seeks a change of venue for his trial on possession of a firearm by a convicted felon. The request for another location for his trial was based on the belief that the monument "displayed prominently in front of the East Feliciana Parish Courthouse sends a message to African Americans of intimidation and oppression, communicating that justice may not be fair and impartial at a courthouse that was nostalgic and sentimental over the institution of slavery that the Confederacy fought for in the American Civil War."[4]

Similarly, before he left office, liberal Mayor Mitch Landrieu of New Orleans removed four major Confederate monuments from the Crescent City in 2017 and won the JFK "Profile in Courage Award" in 2018 presented by the family of U.S. President John F. Kennedy. Landrieu targeted statues of Jefferson Davis, who was first interred in New Orleans and then removed to Richmond, Virginia, and Generals Robert E. Lee and Pierre G. T. Beauregard, namesake of Beauregard Parish, Louisiana. Landrieu also removed a monument dedicated to opponents of Reconstruction. Landrieu's two terms as mayor ended on May 7, 2018. He published a book, In the Shadow of the Statues, which recounts his attack on Confederate heritage. He notes that he had difficulty finding a contractor to remove the statues because of the possibility of negative publicity.[5] Landrieu was even mentioned as a potential 2020 Democratic nominee to oppose Donald Trump, but the former mayor did not enter the race for his party's nomination.

On October 19, 2017, the Caddo Parish Commission, after hearing public input, voted 7-5 to remove the monument from the downtown location. The United Daughters of the Confederacy established the monument and claims ownership of the ground on which it sets. The UDC filed suit in a bid to halt the removal. Presiding Judge Robert G. James, a liberal appointee of Bill Clinton, rejected the UDC's attempt to procure a preliminary injunction barring the removal of the monument. James wrote that the UDC faces an "uphill battle" in trying to prove that it owns the land on which the monument sets. James said that the UDC "failed to meet that burden or to show that it is entitled to relief otherwise. Judge James first set the court date for April 30, 2018.[6]

The United Daughters of the Confederacy then sought depositions from Steven Jackson, Lyndon Johnson, Matthew Linn, and Stormy Gage Watts, four of the seven liberal commissioners who voted for removal of the monument. Judge James quickly denied the request. He said that the reasons Jackson, Johnson, Linn, and Watts voted for removal are irrelevant to the case.[7]

On May 14, 2018, Judge James again denied a motion to reconsider his January decision against the United Daughters of the Confederacy. The UDC's Shreveport chapter sued after the Caddo Parish Commission voted to remove the monument. The organization sought a preliminary injunction to stall removal pending a trial. Caddo Parish has yet to announce specific plans to move the structure.[8] On July 26, 2018, Judge James dismissed the UDC suit over ownership of the monument.[9][

On August 27, 2018, James denied another motion from the UDC, this time to vacate his July ruling that the Caddo Parish government may remove the Confederate monument from the grounds of the parish courthouse. An appeal before the Fifth Circuit Court of Appeals in New Orleans appears forthcoming, but there is no timetable for disposition of the appeal. Meanwhile, vandals used spray paint to post a vulgarity on the statue which referred to the Ku Klux Klan. The UDC had the vulgarity removed. This marked the third instance of vandalism to the structure since 2015.[10]

In March 2019, a three-judge panel of the United States Fifth Circuit Court of Appeals in New Orleans sided with Judge James in the appeal and against the supporters of the monument. The Caddo Parish Commission is meanwhile raising $500,000 for monument removal though a new location has not been revealed. The UDC was ordered to remove the monument with a 90-day notice, but the group lacks the needed funds for relocation.[11]

In October 2019, the United States Supreme Court refused to hear the appeal filed by the defenders of the monument. The high court left intact the Fifth Circuit ruling. Presumably by its inaction, the court set a precedent that all Confederate monument location questions wrest with the local governing authorities, not the owners of the monuments or those defending Confederate heritage.[12]

The United Daughters of the Confederacy argues that the removal of the statue is not covered by Article 493 of the civil code which authorizes the government of Caddo Parish to dismantle oilfield equipment no longer in use on vacant properties.[13]

On June 30, 2020, a group of Black Lives Matter protesters flocked to the Caddo Parish Courthouse to oppose further delays in the removal of the Confederate monument. Linus Mayes, the organizer of the liberal group Community Congress for Systemic Justice, called the protesters "peaceful" though they waved guns to threaten the defenders of the monument. Nearby police prevented a clash from developing.[14]

On July 15, 2020, the Caddo Parish Commission, which consists of five white Republicans, one Hispanic Republican, and six black Democrats, voted 11-1 to erect a wooden box around the monument to prevent it from public view. Several commissioners also claim that the box will protect the monument from vandalism.[15] A few weeks later, the monument was physically moved to a site in neighboring DeSoto Parish.