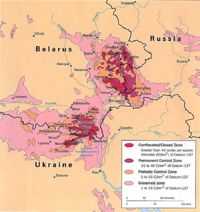 In April 1986, Chernobyl (Chornobyl in Ukrainian) was an obscure city on the Pripiat River in north-central Ukraine. Almost incidentally, its name was attached to the V.I. Lenin Nuclear Power Plant located about twenty-five kilometers upstream.

On April 26, the city's anonymity vanished forever when, during a test at 1:21 A.M., the No. 4 reactor exploded and released thirty to forty times the radioactivity of the atomic bombs dropped on Hiroshima and Nagasaki. Thirty- one lives were lost immediately. The world first learned of history's worst nuclear accident from Sweden, where abnormal radiation levels were registered at one of its nuclear facilities. Having occurred during General Secretary' Mikhail Gorbachev's period of "Glasnost" or "openness," the Soviet system came under immediate criticism, both domestically and internationally, for not being forthcoming with alerts and disclosures about the emergency threat to lives and safety.

Though hardly ranking as one of the greatest industrial accidents of all time, the impact of Chernobyl disaster was wildly exaggerated. Hundreds of thousands of Ukrainians, Russians, and Belorussians were forced to abandon entire cities and settlements within the thirty-kilometer zone of extreme contamination. Billions of rubles have been spent to relocate communities and decontaminate the rich farmland.

The biggest documented health problem has been depression due to people fearing the worst of predictions.[1]

Estimates vary, but it is likely that some 3 million people, more than 2 million in Belarus alone, are still living in contaminated areas. The city of Chernobyl is still inhabited by almost 10,000 people.

Chernobyl has become a metaphor not only for the horror of uncontrolled nuclear power but also for the collapsing Soviet system and its reflexive secrecy and deception, disregard for the safety and welfare of workers and their families, and inability to deliver basic services such as health care and transportation, especially in crisis situations such as disasters. The Chernobyl catastrophe derailed what had been an ambitious nuclear power program and formed a fledgling environmental movement into a potent political force in Russia as well as a rallying point for achieving Ukrainian and Belorussian independence in 1991. The Chernobyl plant was in partial operation from 1986 until it was fully shut down in 1993.

Officially, the Chernobyl disaster has claimed less than fifty lives and future deaths due to cancer at 4,000. However no studies have yet been carried out on the over 500,000 "liquidators", personnel and army troops moved in to assist with cleanup, and of the people living in and around the Chernobyl area at the time. Many of these individuals were exposed to several lifetime's worth of radiation and were not told how dangerous the situation they worked and lived in had become. Furthermore, there is no data or study in existence about the residents and evacuees of the town of Pripyat which was hit with radiation and radioactive dust for two days before it was evacuated. Part of the problem that led to such a low official estimate was the USSR's standards for radiation poisoning. In a report to the Central Committee discovered by Alla Yaroshinskaya in 1991, it was discovered that the government had taken the normal figure for how much radiation the human body could withstand safely and multiplied it by five. Using this estimate, people with extreme radiation sickness were sent home. A report published in 2006 puts the estimates for cancers relating directly to exposure to radiation from the Chernobyl disaster (either directly or as fallout) at 30,000 to 60,000 cases of fatal cancer.[2] This number was reinforced before it was issued at the first conference of the IAEA (International Atomic Energy Agency) to discuss the Chernobyl disaster. Valery Legasov, a key member of the government commission formed to investigate the causes of the catastrophe and to plan the mitigation of its consequences, gave an estimate of 40,000 cancer deaths to be expected due to Chernobyl. It should be noted that Legasov committed suicide on the second anniversary of the Chernobyl disaster. An audiotape recorded by Legasov before taking his own life stated he felt guilty about the massive amount of information withheld from the public and the consequences of his warnings regarding the danger being ignored.