Chocolate is a foodstuff, originating from the cocoa bean. Chocolate is often used in desserts. Belgium is famous around the world for its chocolate.[1] Germany, Austria, Switzerland, the Netherlands, and the Scandinavian countries are also well known for their chocolate and other candy.

Chocolate probably originated in South America and was likely brought to Mexico by the Aztecs. A Chocolate beverage called xocolatl (the Nahuatl source of the word cocoa) is considered the precursor to modern hot chocolate, although this drink was bitter and peppery (it could be mixed with chili pepper).[2] It was often used for religious purposes, since the cocoa bean was considered to be sacred. According to legend, Montezuma drank around 50 cups of this beverage a day.[3] Chocolate was spread to the Old World after Hernan Cortes conquered Mexico and traded cocoa beans to Europe in exchange for European goods as part of the Columbian Exchange. The Spanish made it into the drink we know today, heating the drink and adding sugar. Soon, chocolate was extensively used in desserts and drinks. Today, chocolate is produced throughout the equatorial portions of the world, from Venezuela to Madagascar. Half of the world's chocolate is now produced in the Ivory Coast under what are often terrible working conditions.[4]

In 1765, chocolate production began in the New World. A water-powered mill in Dorchester, Massachusetts operated by John Hanan processed cocoa brought in from the West Indies by ship.[5]

Nowadays, chocolate is most often eaten in the form of candy bars or hot cocoa (although chocolate eggs and rabbits are often available for sale during Lent since they are eaten in celebration of Easter). The top ten chocolate manufacturers in 2005 sold about US $42 billion in confectionary.[6] There is a common belief that chocolate is bad for people's health and that it causes acne. In actuality, however, chocolate contains large amounts of healthy antioxidants, and food is not a cause of acne.[7] If eaten unsweetened, chocolate is generally believed to actually be healthy. However, most admit that the addition of sugar to chocolate largely cancels out its benefits.


Women are stereotypically considered to be major consumers of sweetened chocolate.

Chocolate comes from pod-shaped fruit, which grows on the Theobroma cacao tree, often called simply, "cacao" (pronounced ka-KOW). "Theobroma" means "food of the gods" in Greek. Each tree produces about 2,000 pods per year. The majority of these pods (about 70%) are produced in Africa. These rigid pods, often described as "football shaped," are filled with 30 to 40 seeds, and a sticky white pulp. This pulp is sometimes used in making drinks as-is, since it is both sweet and sour. The seeds, however, are very bitter.[8][9]


The entire pods are placed into wooden bins or pits in the ground, covered with banana leaves, then left to ferment. Depending on the type of bean, this process can take just a few days, or up to several weeks. Then, the beans are taken out and sun-dried for about a week. Other drying methods such as heating by fire can be used, but tend to produce an inferior taste. At this point, the beans are shipped to a factory for processing.[8][9][10]
At the factory, the cacao beans are sorted by type and sifted for unwanted objects. Up to twelve different kinds of cacao are used at a time, so they are weighed out in the correct proportions. They are then roasted for between thirty minutes and two hours, at temperatures ranging from 210F to 290F. Finally, the outer shells of the pods are then cracked and removed by winnowing. All that remains now are the crushed seeds, which are called "nibs." These are edible and have a strong chocolatey flavor, but are still very bitter. The cacao nibs are now ground into a thick paste, which is called chocolate liquor (though it contains no alcohol).[9][10][11][12] 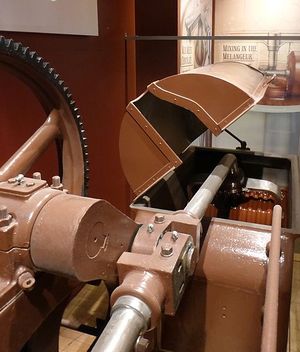 Hershey Conche from the early 1900s

From here, some of the chocolate liquor is pressed to removed the cocoa butter, which leaves behind a dry substance which can be ground into cocoa powder. The extracted cocoa butter is then used in things ranging from white chocolate to cosmetics. The remainder of the chocolate liquor usually mixed with sugar, cocoa butter, milk and sometimes vanilla. From here, this paste is rolled to create a smoother texture, and then put into a chocolate maker called a "conch" (because the first such machine looked something like a conch shell). Here it is mixed, mashed, swirled and aerated. During this process, the manufacturer typically adds some more ingredients to improve consistency, such as cocoa butter and soy lecithin. Conching can be done for only a few hours, but the quality is improved by doing this for much longer times, up to six days.[9][10][11][12]
The chocolate is then tempered, which is a process of stirring, cooling, and slowly reheating multiple times. This helps it to melt properly in the future, and give it a smooth, glossy finish after molding. It is then poured into a mold, and allowed to cool, resulting in sweet chocolate bars.[9][10][11][12]