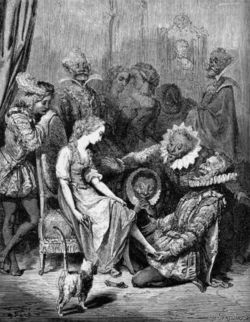 Cinderella is a European legend or folk tale about a motherless girl. She was raised by her father, but he remarries unwisely and suddenly dies, leaving her at the mercy of a wicked stepmother and two selfish stepsisters. In Charles Perrault's version, Cinderella is helped by a fairy godmother to meet and wed a handsome prince. The story is a favorite of little girls.

The classic plot element which makes the story memorable is the slipper (or shoe) which Cinderella loses while running out of the ball. The prince uses this as a token to identify the mysterious girl he enjoyed dancing with. The prince or his agents scour the countryside, having every unmarried lady try it on. In some variations of the story, the stepmother tries to prevent Cinderella from trying it on ("She's only a servant.")

Cinderella has been adapted numerous times for stage and screen, and is also a popular story for pantomime. Some of the best-known versions are listed here.