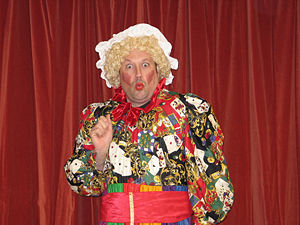 Pantomime (or 'panto' for short) is a traditional form of theater that is popular in the United Kingdom at Christmas time. It is usual for at least one pantomime to be staged in every British town or city in December and January.

All pantomimes share certain features, including a matronly 'dame' character played by a man in drag, an exaggeratedly evil but incompetent villain, a final wedding scene, audience participation, songs and earthy humor. Most pantomimes use a traditional plot (often a fairy tale), such as Cinderella, Dick Whittington or Aladdin, but almost any well-known story can be adapted into a recognisable pantomime by incorporating the characteristic features of the form.

The vast majority of pantomimes take their story from a repertoir of commonly-used pantomime plots. These may be:

It is less common but not unknown for pantomime productions to adapt a story that is not traditionally used as a pantomime. For example, the Cambridge Footlights theater troupe has recently staged pantomime adaptations of Spartacus and Faust.[1] Even in these instances, the story chosen must be one that will be familiar to audiences.

All pantomime plots unfold along similar lines, mainly based around the interactions of the characters described below. Other essentials are that the story must involve conflict between good and evil, and that it must end happily, with the villain defeated and the hero marrying his sweetheart, and the other good characters finding happiness in one form or another. If a story does not have a happy ending, or does not feature the required character types, it will need to be adapted to include these elements if it is to be performed as a pantomime.

All pantomimes feature all or most of the following stylized characters:

Below are two examples of how the stock characters listed above are cast in specific stories: Key to the appeal of a pantomime is the way the characters interact with and address the audience. A great deal of banter and general conversation takes place throughout the performance, villains are booed and hissed at and heroes are cheered. Most characteristic of pantomime are the four 'classic' conventions outlined below.

This routine appears several times in every pantomime. A character makes an assertion, for example "I'm the most intelligent woman in the world!" and then turns expectantly to the audience, who then loudly voice their disagreement by shouting (in this example) "Oh, no, you're not!". The character then reasserts "Oh, yes, I am!" and the argument continues in this way until the actor tires of it or is interrupted by some other character or event.

Audiences take particular delight in humiliating the villain in this way. This is especially effective if the routine has previously been done by the dame or another 'base' character: by giving the same treatment to the villain, his illusions of grandeur can be comprehensively undermined and derided.

At some point in the play, a villainous character will sneak onto the stage without the hero or another well-liked character noticing. The audience will then attempt to warn their favorite by shouting "He's behind you!", at which point the hero will turn round the wrong way and fail to see the villain. The routine continues in this way, with the audience attempting to describe the villain's whereabouts and the hero looking everywhere but the right place. Skilled pantomime actors are able to continue the charade for some time, often ending it by bumping into each other.

In most pantomimes, one of the light-relief characters (e.g. the buffoon) will place a precious object (at least to them - it is often laughably worthless) at the side of the stage and ask the audience to look after it for them. Later on, a villainous character will see the object and attempt to steal it, prompting the audience to loudly summon its owner. If the owner then fails to see the would-be thief, this can lead into the 'he's behind you' routine described above.

Characters who are down on their luck or in unhappy situations often angle for the audience to comfort them with a sympathetic 'Aaaaaah!'. For example, the buffoon's unrequited love for the main female character will often elicit this response. On occasion, if an actor perceives that the audience's 'Aaaaah!' is lacking in enthusiasm, he or she will say 'Oh, it's much sadder than that!', prompting a second, usually more satisfactory, audience response.

As a traditional form of theater, pantomime's conventions are not formalized, but have grown up organically over hundreds of years by drawing on various different influences. Two of the most recognizable are Italian Commedia dell'arte, a stylized theater form that provides the templates for many of the stock characters (the word 'pantomime' comes from Pantalone, one such character[2]); and English music hall, which supplies much of the bawdy humor and audience participation.

On a more general level, the simplified conflict between good and evil could be traced back to medieval morality plays (which also used to be performed at major festivals), while the portrayal of grotesque stereotypes and undermining of dignified or would-be dignified figures have a certain kinship with the works of ancient Greek playwrights such as Aristophanes and their successors. Although pantomime is a traditional theater form, it has not become 'fossilized', and adapts to suit the needs of modern audiences. Most obviously, professional pantomimes recruit local and national celebrities to help pull in crowds. These are often soap opera actors, singers, or television and radio personalities. The stylised and exaggerated conventions of pantomime do not require much aptitude for naturalistic acting, so personalities from the worlds of sport (e.g. the boxer Frank Bruno), music and television have often been able to more than compensate for a lack of formal acting experience with a mixture of enthusiasm and the public's existing goodwill. It is not uncommon for every major part in a top-level pantomime production to be played by a famous face. A common exception is the dame: this role is so important and specialised that few famous people are able to play it successfully, although some well-known actors such as Christopher Biggins specialise in playing dames at Christmas time.

Sometimes people who have been very famous, or 'serious' actors, see pantomime as a humbling sign of a career on the wane, but many others enjoy the work for its own sake - Sir Ian McKellen is a good example of an actor who chose to take part in pantomime when he had never been more sought-after in serious film and theater.

As well as the cast, modern pantomimes often include topical jokes about current events, politicians and celebrities, and references to modern technology, revelling in the anachronism of, say, a motorbike appearing in a pre-industrial English village. However, any modernization must be carefully judged, since part of a pantomime's appeal is the chance to enjoy a traditional form of entertainment that one would never see at any other time of year.