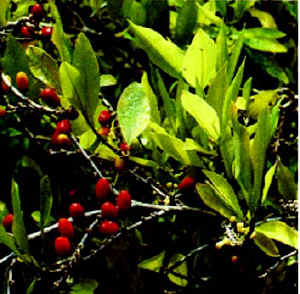 Cocaine is highly addictive, illegal, and deadly drug, which destroys virtually everyone misguided enough to try it. In many cases the only thing powerful enough to overcome the addiction is to turn one's life over to Jesus Christ. Cocaine was first used natives of South America who chewed the leaves of the coca plant, and then later isolated and purified for medical use as a local anesthetic.

Cocaine is extracted from the leaves of the coca plant (Erythroxylum coca), which is indigenous to the Andean highlands of South America. Natives in this region chew or brew coca leaves into a tea for refreshment and to relieve fatigue, similar to the customs of chewing tobacco and drinking tea or coffee.

Pure cocaine was first isolated in the 1880s. It was used as a local anesthetic in eye surgery. It was particularly useful in surgery of the nose and throat because of its ability to provide anesthesia, as well as to constrict blood vessels and limit bleeding.

Many of the therapeutic applications of raw, "natural" cocaine are now obsolete due to the development of safer drugs, either synthesized products from the natural coca extract or man-made using some of the natural products chemical components.

The effects on individuals vary and include:

In addition some people who are very sensitive to the drug (and will not realize it), may die after a single dose.[4] Cocaine abuse during pregnancy has many ill effects. It can cause considerable damage to the organs of the developing fetus, and lead to birth defects, premature detachment of the placenta, premature births, low birthweight babies, nutrition deficiencies, and babies born already addicted to the drug.[4][8][9]

Cocaine has many street names, including "crack", "dope", and "rock". It is extremely addictive and extremely dangerous, especially to pregnant women and their children. It is an illegal drug in the United States, but illegal traffic in the drug is on the rise.

Among the many evils against which society struggles, one of the most vicious is the traffic in cocaine. In every community where the menace develops, all the forces which society can mobilize, including social agencies, doctors, law enforcement officials and government, should band together to stamp it out. Without such activity the dope evil would run rampant. Yet it has long been recognized that one other powerful force is necessary before the struggle can be completely successful. That force is an aroused and educated public awareness. It is in the hope of aiding in developing such awareness that this section has been produced. The dangers listed above have happened to many men and women, and there will be many more tragic men and women until you, the informed citizen, join the forces now fighting the dope evil to forever stamp it out in our land.

"Illegal cocaine is usually distributed as a white crystalline powder or as an off-white chunky material. The powder, usually cocaine hydrochloride, is diluted with a variety of substances, the most common being sugars such as lactose, inositol, and mannitol, and local anesthetics such as lidocaine. The adulteration increases the volume and thus multiplies profits. Cocaine hydrochloride is generally snorted or dissolved in water and injected. It is rarely smoked because it is heat labile (destroyed by high temperatures).

"Crack," the chunk or "rock" form of cocaine, is a ready-to-use freebase. On the illicit market, it is sold in small, inexpensive dosage units that are smoked. Smoking delivers large quantities of cocaine to the lungs, producing effects comparable to intravenous injection. Drug effects are felt almost immediately, are very intense, and are quickly over. Once introduced in the mid-1980s, crack abuse spread rapidly and made the cocaine experience available to anyone with $10 and access to a dealer. In addition to other toxicities associated with cocaine abuse, cocaine smokers suffer from acute respiratory problems including cough, shortness of breath, and severe chest pains with lung trauma and bleeding. It is noteworthy that the emergence of crack was accompanied by a dramatic increase in drug abuse problems and drug-related violence." [10]

"Mexican cartels are now responsible for trafficking 90% of the cocaine entering the US, generating billions of dollars a year." [1]