The complex numbers are a set of numbers which have important applications in the analysis of periodic, oscillatory, or wavelike phenomena. Mathematicians denote the set of complex numbers with an ornate capital letter:

. They are the 5th item in this hierarchy of types of numbers:

The second component is called the imaginary part. Its unit basis vector is called

. The first component is called the real part. Its unit basis vector is just 1. Thus, the complex number

can also be written

. Numbers with real part of zero are sometimes called "pure imaginary", with the term "complex" reserved for numbers with both components nonzero.

While the "invisible" nature of the imaginary component may be disconcerting at first (and the word "imaginary" may be an unfortunate term for it), the complex numbers are just as genuine as the Dedekind cuts and Cauchy sequences that are used in the definition of the "real" numbers.

The complex numbers form a field, with the mathematical operations defined as shown below.

The field operations are defined as follows:

Addition is just the standard addition on the 2-dimensional vector space. That is, add the real parts (first components), and add the imaginary parts (second components).

Letting the complex numbers w and z be defined by their respective components:

Multiplication has a special definition. It is this definition that gives the complex numbers their important properties.

Writing out the product

in the obvious way, we get the same answer:

This means that, using

, one can perform arithmetic operations in a completely natural way.

Division requires a special trick. We have:

To get the individual components, the denominator needs to be real. This can be accomplished by multiplying both numerator and denominator by

This division will fail if and only if

are both zero, that is, the complex denominator

The complex numbers form an algebraically closed field. This means that any

degree polynomial can be factored into n first degree (linear) polynomials. Equivalently, such a polynomial has n roots (though one has to count all multiple occurrences of repeated roots.) This statement is the Fundamental Theorem of Algebra, first proved by Carl Friedrich Gauss around 1800. The theorem is not true if the roots are required to be real. (This failure is what led to the development of complex numbers in the first place.) But when the roots are allowed to be complex, the theorem applies even to polynomials with complex coefficents.

The simplest polynomial with no real roots is

, since -1 has no real square root. But if we look for roots of the form

must be 1. This means that

, so the roots are

Similar analysis shows that, for example, 1 has three cube roots:

One can verify that

Complex numbers are often depicted in 2-dimensional Cartesian analytic geometry; this is called the complex plane. The real part is the x-coordinate, and the imaginary part is the y-coordinate. When these points are analyzed in polar coordinates, some very interesting properties become apparent. The representation of complex numbers in this way is called an Argand diagram.

If a complex number is represented as

, its polar coordinates are given by:

Transforming the other way, we have:

The radial distance from the origin,

, is called the modulus. It is the complex equivalent of the absolute value for real numbers. It is zero if and only if the complex number is zero.

, is called the phase. (Some older books refer to it as the argument.) It is zero for positive real numbers, and

radians (180 degrees) for negative ones.

are represented in modulus/phase form, we have:

But that is just the addition rule for sines and cosines!

So the rule for multiplying complex numbers on the Argand diagram is just:

Multiply the moduli.
Add the phases.

One can use this property to find all of the nth roots of a number geometrically. For example, by using these trigonometric formulas:

The three cube roots of 1, listed above, can all be seen to have moduli of 1 and phases of 0 degrees, 120 degrees, and 240 degrees respectively. When raised to the third power, the phases are tripled, obtaining 0, 360, and 720 degrees. But they are all the same angle—zero. So the cubes of these numbers are all just one. Similarly,

One can apply this property to the nth roots of any complex number. They lie equally spaced on a circle. This is DeMoivre's theorem.

The three cube roots of +1. 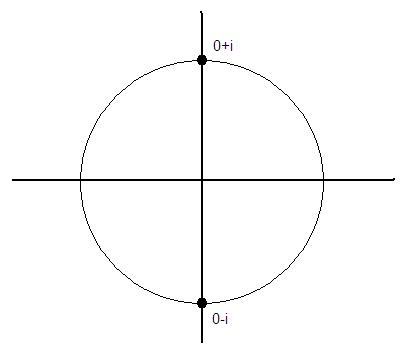 The two square roots of -1.

A careful analysis of the power series for the exponential, sine, and cosine functions reveals the marvelous Euler formula:

The complex conjugate, or just conjugate, of a complex number is the result of negating its imaginary part. The conjugate is written with a bar over the quantity:

. All real numbers are their own conjugates.

It follows that, if P is a polynomial with real coefficients (so that its coefficients are their own conjugates)

is a root of a real polynomial, then, since zero is its own conjugate,

is also a root. This is often expressed as "Non-real roots of real polynomials come in conjugate pairs." We saw that above for the cube roots of 1—two of the roots are complex and are conjugates of each other. The third root is its own conjugate.

The higher mathematical functions (often called "transcendental functions"), like exponential, log, sine, cosine, etc., can be defined in terms of power series (Taylor series). They can be extended to handle complex arguments in the completely natural way, so these functions are defined over the complex plane. They are in fact "complex analytic functions". Just about any normal function one can think of can be extended to the complex numbers, and is complex analytic. Since the power series coefficients of the common functions are real, they work naturally with conjugates. For example:

Complex numbers are extremely important in many areas of pure and applied mathematics and physics. Basically, any description of oscillatory phenomena can benefit from a formulation in terms of complex numbers.

The applications include these:

algebra— (including finding roots of polynomials)
linear algebra—vector spaces, inner products, Hermitian and unitary operators, Hilbert spaces, etc.
eigenvalue/eigenvector problems
number theory—This seems improbable, but it is true. The Riemann zeta function, and the Riemann hypothesis, are very important in number theory. For a long time, the only proofs of the prime number theorem used complex numbers. The Wiles/Taylor proof of Fermat's Last Theorem uses modular forms, which use complex numbers.
trigonometry—finding arcsine and arccosine functions of numbers with absolute values more than 1 or arcsecant and arccosecant functions with absolute values between 0 and 1.