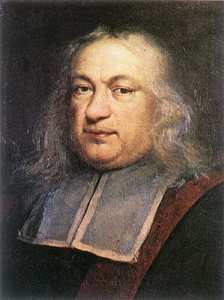 Fermat's Last Theorem asserts that the well-known Pythagorean Theorem has no solutions for higher powers. That is,

It was conjectured by the French mathematician Pierre de Fermat. He said he had proved this problem but that there was not enough room in the margin to state his proof:[1]

The English translation of Fermat's Latin statement is:[2]

This problem has confounded mathematicians for centuries, and there still is no proof for it using elementary techniques. Gauss and other mathematicians doubt that Fermat was able to prove it himself, but Cal Tech mathematics Professor E.T. Bell, who wrote the standard biography of all the great mathematicians, wryly observed that "the fox who could not get at the grapes declared they were sour." [3] "And so for all of [Fermat's] positive assertions with the one exception of the seemingly simple one which he made in his Last Theorem and which mathematicians, struggling for nearly 300 years, have been unable to prove: whenever Fermat asserted that he had proved anything, the statement, with the one exception noted, has subsequently been proved. Both his scrupulously honest character and his unrivalled penetration as an arithmetician substantiate the claim made for him by some, but not by all, that he knew what he was talking about when he asserted that he possessed a proof of his theorem."[4]

The theorem is as follows: For integers n > 2, there are no nonzero integral solutions to: xn + yn = zn

In the summer of 1986, Ken Ribet proved that Fermat's Last Theorem is a special case of the Taniyama–Shimura Conjecture.

Claim of a Proof

In a series of lectures in 1993, mathematician Andrew Wiles announced a proof using techniques in algebraic geometry, relying on the nonconstructive Axiom of Choice.[5] A flaw was found before publication, and Wiles spent a year on fixing the flaw. Then, in September 1994, he and Richard Taylor announced a new version of the proof. However, criticism does continue on the internet.[5] Further criticism came from Marilyn vos Savant, known for her very high IQ and commentary on mathematics, in her column and book.[6][7] She questioned the use of Non-Euclidean geometry and the Axiom of Choice, among other points. She retracted her argument in a 1995 addendum to the book.

The Wiles-Taylor proof also makes use of some Grothendieck tools in cohomological number theory that use an axiom beyond the standard ZFC axioms. It is an open question whether these tools can be formalized into a ZFC proof.[8]

Unlike other mathematical breakthroughs, this claimed proof of 1993 has facilitated little, if any, insights or simplifications since then. Asking in recent years about the reliance by this proof on the disfavored Axiom of Choice has even resulted in censorship by some.[9]

Transcendental Proof of a Finite Intellect?

A devout Catholic, Fermat held a judicial office within the Church, and served as parlementaire in Toulouse. He was certainly acquainted with the writings of St. Thomas Aquinas and the evidence of his penetrating intellect. It is entirely possible that the perceived impossibility of a proof of the theorem Fermat proposed was in itself a clear demonstration of the realization of the possibility that what is famously called "Fermat's Last Theorem" was in itself a transcendental proof of the limitations of human intellect and of the limitations of mathematical and scientific methods in the presence of the wisdom and intelligence of the one transcendent God comprehending of all things subsumed under the Omniscient and Omnipotent Divine Rule. It is indirectly a "remarkable proof" that man is not infinitely capable ultimately of finally understanding all things, and is not God. Like the Christian mysteries, Fermat's Last Theorem is above the intellect, but not opposed to it.[10] Pierre de Fermat's marginal notation may be an informal expression of his personal insight to the Theorem as being of itself "a truly marvelous demonstration of this proposition [of impossibility per se]" directly relating to the wonder of this transcendent truth.