Before Making Your Own Logo Read This

The "rules" for creating the logo are as follows:

Nor do I, for three reasons:

There is something weird about it, but I can't quite tell what it is. Also, it doesn't say Conservapedia on it, but I can change that if you want me to. Please critique it, and I will improve it with your suggestions.

PS: It doesn't really have that white background. It is supposed to be just the circle. Sharon

I think the background earth is too vivid, it should be maybe light blue and green.--TimSvendsen 16:49, 7 January 2007 (EST)

OK. I'll do that in a minute. Sharon

I really don't like either of the two "globe" logos. We are an AMERICAN encyclopedia. If you want to put something behind the logo put a map of America. Also, Wikipedia uses a globe, we don't want something so similar... definitely no globe PhilipB 16:56, 7 January 2007 (EST)

True, the globe thing is a little to close to Wikipedia's logo. My next one will be "Conservapedia" over a blue and green map of America. ~ Sharon

Actually, now that I think of it, although we do favor the American spelling of words, we have contributors from all around the world. Just something to think about. ~ Sharie

I noticed something interesting about Wikipedia's logo. It reflects their mission statement "the encyclopedia anyone can edit" it the way it has a missing puzzle piece. I wonder if we could come up with something that reflects "a conservative encyclopedia you can trust". If anyone has any ideas put them on here. ~ Sharie

REPLY: Yes, it is true that we favor American spellings for words and that we have contributors worldwide, but this is beside the point. Conservapedia is American, unlike Wikipedia which even though it is located in America, does not support America openly. It is very disappointing that this America-based website does not show its patriotism openly. Conservapedia will always show that it is proud to be American. PhilipB 17:26, 7 January 2007 (EST)

Comment I think that this particular logo (above) is the best so far.

As to the little debate you are having, I think that a globe is a very appropriate encyclopedia logo; we hope to have facts in our encyclopedia that relate to the entire world, not just America. The fact that we require american spellings does not mean we only want information about america. The logo should be a reflection of what type of information we offer.

The background looks too dull along with that red color, which really hurts my eyes, but it will probably look much better after some color changes. ~ Sharon

That looks much better! The other map looked like goggles or something. ~ Sharon

These look pretty good Sharon. However, remember that we want the logo to "blend" well with the rest of the site. These logos would kind of clash with the other colors... if you know what I mean. Sorry for being so negative ;) PhilipB 17:28, 7 January 2007 (EST)

Here is another logo in softer colors with soft edges. I also changed the fonts around a little, but can put them back the other way if you don't like these. I changed my mind. The more I see, the less I like the idea of the logo being based on a map or globe. I think something made up of several different pieces that reflect our "mission," including things like a a cross, an american flag, a bible, etc. --TimSvendsen 10:21, 8 January 2007 (EST)

I think that the bright colors are good. It may be a bit much when you see it big like that, but if it is small and in the corner of the screen it will help it be more noticable. You don't want the logo to blend so much that it "hides" in the corner. --TimSvendsen 11:07, 8 January 2007 (EST)

I disagree: The logo should not reflect all of the information that we have to offer, but the difference between what we have to offer and what other people have to offer. It should reflect our point of view. Nobody is going to look at a logo and say "Oh look, an american flag, they must only have information about america." The logo reflects Christianity and Patriotism, not that we only have information about america and christianity. Even if we did want to do it your way the map would still be a bad idea because it implies geography. The logo I posted is just a concept, not a final product. it took me about 5 minutes. We would certainly want a more detailed cross, and bigger type. --TimSvendsen 11:29, 8 January 2007 (EST)

I never thought about the world map implying geography. Interesting point. Maybe we are putting too much importance on the logo. Although it should look good and reflect the mission of Conservapedia, I wonder if visitors to the site are really going to give the logo much more than a quick glance. I for one don't ever really pay much attention to a site's logo. I think I am going to do something similar to what you did for my next logo. ~ Sharon

Tim, I agree. Yes, we are getting pretty hung up on this issue. The facts are that we can't use a globe because it's way to close to Wikipedia's logo and that we'll always scare a small amount of people away depending on the logo we have. Even so, this should not intimidate us from placing what we are about in the logo. For now, let's just keep putting out ideas that don't incorporate a globe. PhilipB 11:48, 8 January 2007 (EST) 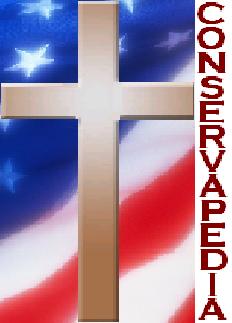 Let me know what you think. Oh, and tell me if you want me to lay off the cross-in-C thing. Nobody commented on it so I just figured I'd keep using it, but if you don't like it please don't hesitate to tell me. I like this patriotic theme! It makes me think of the Fourth of July. :P ~ Sharon

Just Wondering Does the logo have to include the word conservapedia? --TimSvendsen 18:54, 8 January 2007 (EST)

Reply I don't think so, but I usually include it because the logo doesn't seem to look complete without it. ~ Sharon

I was thinking that we could keep the logo seperate from the word. That way we can have the word above it or next to it or something, or we could decide to not have the word anywhere near it. --TimSvendsen 23:00, 8 January 2007 (EST) It's simple, but I think it is pretty cool. Tell me what you think....I can always modify it: slower, faster, different effect. David R

There you go...135x135, mainly transparent, good color theme. Comments or suggestions would be appreciated. David R

I don't like it at all. Although the general idea is ok, it's not professional. Frankly, it looks like it was done on Paint. And the first thought that came to my mind when I saw it was the Fourth of July.

I'm not quite sure how David could make it any more "professional". I think it looks awesome now. Also, this is an American encyclopedia, so if the logo reminds you of the Fourth of July, that's a good thing. If there is a lot of controversy over using this logo, perhaps we can take a vote. ~ SharonS 19:30, 1 March 2007 (EST)

WOW!!!! I just discovered this page. These logos are all fantastic!!!! Please pick and implement whatever you think is best! We can always improve it in the future.--Aschlafly 19:47, 1 March 2007 (EST)

I'm a little concerned about transparency. You posted it as a .jpg and .jpg doesn't allow for transparency. I hope you did the original in a format like .gif or .png which does, and kept the original. If not, you may have lost the transparency for good, because not only does .jpg not have transparency, after you do the conversion to .jpg not all the "white" areas are actually pure white, so it's not easy to make them transparent again.

I'm not sure the transparency is really all that important, though. One thing you might try is the effect adding a simple one-pixel black border, and see if that gives a crisper appearance against the greyish background. Just my $0.02.

But really, it doesn't matter, just do something. Wikipedia's early logo didn't look as good as this one--at right is Wikipedia's logo circa 2002--and it can always be changed later. Dpbsmith 19:52, 1 March 2007 (EST)

I agree, we can always change the logo easily in the future. There is really no excuse not to have one. David's latest logo has been approved by most of the regular users. If Philip thinks its alright too, then I think we should go ahead and use it! ~ SharonS 19:59, 1 March 2007 (EST)

I don't really like David's logo with the border. It seems to me that it boxes it in too much and prevents it from fading smoothly into the background. ~ SharonS 22:09, 1 March 2007 (EST)

I just notices something about Dave's logo. If the flag is hanging (which it appears to be doing), shouldn't the stars be on the opposite side (the left side)? PhilipB 22:12, 1 March 2007 (EST)

This was just a hypothetical draft, if people like the colors/imagery then say and I'll develop it more. I'm happy to contribute --Gaijin 15:52, 6 March 2007 (EST)

I used Windows Paint to do it in all of 12 minutes. Personally, I would keep the flag background, and transform the "C" logo into something more "crystalized", aka Windows Vista, and have it or both stand out in a 3-D effect. Karajou 23:46, 12 March 2007 (EDT)

Did the site that you retrieved the image from give specific permission for reproduction and alteration of the image in it's copyright statement? If not, it's probably illegal. And since I, like much of you lot here, am a Christian, albeit an Australian one, I shall refer you to Romans 13:1-7 for the bibles' policy on breaking the law. Dallas 01:08, 16 March 2007 (EDT)

Whatever you use as a logo, please don't use the Earth, since this website is not an accurate representation of global beliefs in any way, shape, or form. Using a cross and the U.S. flag, and maybe something like "4004 B.C." since half the site is about creationism, would be more accurate. --ALFa 01:16, 16 March 2007 (EDT)

How about a Conservapedia mascot?