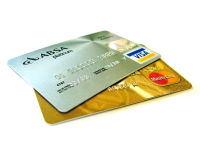 A VISA card and a MasterCard.

A credit card is an access card to a line of credit issued by a bank. It is intended to be used as a revolving account, meaning that consumers are assigned a credit limit and may make any purchase that doesn't exceed that limit, but must make either partial or full payments every month. As long as customers have available credit and their payments are up to date, they may continue to make purchases using the card up to their credit limit. Credit cards make it easier and more convenient for a consumer make purchases inasmuch as:

Some predict that credit cards will soon make paper and coin money obsolete. But in exchange for this convenience, a credit card has costs and dangers.

Credit cards compete with debit cards for handling purchases and other transactions. Unlike a credit card where money is automatically loaned to the cardholder between the time of the purchase and the time of a later payment, a debit card withdraws money from a bank account at the time of purchase. Federal laws extend consumer protections to credit cards, but these protections are not required to cover debit cards. Additionally, Credit card companies charge a transaction fee to the merchant, so the user is aware of paying nothing extra. However, debit cards often charge (lower) transaction fees directly to the cardholder.

If a consumer makes a credit card purchase and the merchant doesn't send the item, or it is not the way the merchant described it, the consumer is protected from having to pay for the item in most cases.

Charge cards which required customers to pay the balance in full every month have been in existence since the late 1800s. The first true credit card was invented in 1958 by Bank of America. The BankAmericard eventually became so widespread that it was spun off from Bank of America and became the agency now known as Visa. Credit card use became increasingly popular in the 1960s and 1970s. Before credit cards, travel was more difficult because travelers needed to carry money, purchase travelers checks, or make special arrangements in advance with banks in the cities they were traveling to. Mail order purchases were made by check, and were very slow, because most companies would wait for the check to clear before shipping the product.

Today, credit cards are governed by four major organizations: Visa, MasterCard, American Express, and Discover. Visa and MasterCard allow banks and credit card companies to issue cards for use on their respective networks, whereas American Express (AMEX) and Discover issue and service cards themselves. 144 million Americans have a general purpose credit card, but there are approximately 641 million cards in circulation. Consumers revolved approximately $904 billion in June 2007,[1] although it is estimated that only 55 million Americans pay their credit card bill in full every month, another 35 million pay only the minimum.[2]

The abrogation of usury laws and over-extension of debt has been implicated in the present credit card problem.[10]