From Conservapedia
(Redirected from Darius)
Jump to: navigation, search 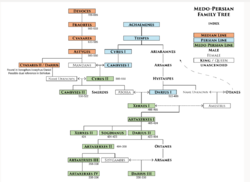 The Achaemid Family Tree showing the merging or the royal houses of the Medes and the Persians to create the Medo-Persian Empire; also known to many as simply the Persian Empire. Upon seizing the throne by murdering False Smerdis, he quelled a multitude of rebellions. Later he quelled the Ionian Revolt and then invaded Greece, but was repulsed at the Battle of Marathon and forced to withdraw.

as Darius the Mede

It is claimed regularly enough by some that the Persian Darius I, was simply known to the Jews as Darius the Mede: as presented in the Book of Daniel and therefore a contemporary of Daniel the Prophet.

Opponents to this view argue that this can not be as:

Darius I is regularly identified[3] as one of the four kings identified in Daniel 11:2 by a broad spectrum of Biblical scholars. Their reasoning is thus:

Ezra 4:4-11 Specifically lists "Darius king of Persia" which logic dictates can only be Darius I. There are no known contestations upon this point.