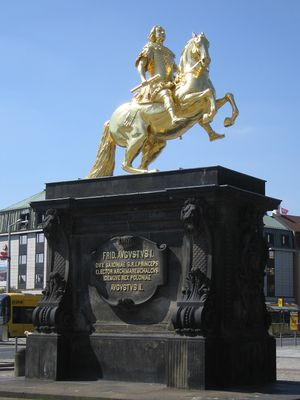 Monument to Augustus II in Dresden

Dresden is a city of eastern Germany and capital of the Bundesland (federal State) of Sachsen (Saxony). It has a population of 508,000 inhabitants.

Historically, it was the capital of the Electorate, later Kingdom of Saxony, and was endowed with a great wealth of baroque buildings and townscape, and many museums and galleries. Much of this was destroyed between the 13 and 15 February 1945 when the city was repeatedly bombed by the Royal Air Force and United States Air Force.

The bombing of Dresden is perhaps the most controversial episode in the history of aerial bombardment of Germany during the Second World War. In addition to killing many civilians, the intense carpet bombing of Dresden destroyed many art treasures of Western Civilization.

Following the war Dresden was part of the Soviet Zone of occupied Germany, and subsequently the German Democratic Republic, until reunification in 1990.

Dresden is the founding place of the political movement PEGIDA.