Training materials provided by Snowden for XKeyscore program detail how analysts can use it and other systems to mine enormous NSA databases by filling in a simple on-screen form giving only a broad justification for the search. The request is not reviewed by a court or any NSA personnel before it is processed. The program covers "nearly everything a typical user does on the internet", including the content of emails, websites visited and searches, as well as their metadata. Under US law, the NSA is required to obtain an individualized FISA warrant only if the target of their surveillance is a 'US person', though no such warrant is required for intercepting the communications of Americans with foreign targets. But XKeyscore provides the technological capability, if not the legal authority, to target even US persons for extensive electronic surveillance without a warrant provided that some identifying information, such as their email or IP address, is known.[3] 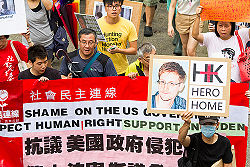 The revelations made Snowden the intelligence community nemesis.[4]

After leaking the information in question, Snowden stayed in Hong Kong for a while; he then left China and went to Russia en route to seeking asylum in Ecuador. Snowden was apparently travelling on a passport that had been revoked.[5] The Wikileaks organization has helped Snowden to stay ahead of Obama's grasp.[6] The president of Ecuador Rafael Correa explained that Snowden cannot go to Ecuador.[7] At one point, Obama had Evo Morales, the prime minister of Bolivia detained in an inept attempt to intercept Snowden. As of July 6, 2013, Nicaraguan President Daniel Ortega and Venezuelan President Nicolas Maduro had offered asylum to Snowden.[8]

Snowden is a Libertarian[9] and a Buddhist.[10] Although he has claimed to have fought for freedom of speech, he nonetheless ignored that Ecuador was also practicing massive surveillance measures.[11] He was alleged to be a Russian agent.[12] Thereup on Russian government granted Snowden asylum for three years in Russia.[13] In addition, the left wing professor and Weather Underground terrorist Bill Ayers on March 12, 2016, when tweeting his dining room altar of revolutionary heroes (many of which included the likes of Vladimir Lenin, Malcolm X, Karl Marx and Che Guevara), included a picture of Snowden that thanked him.[14] John Boehner called Snowden a "traitor" who committed a "giant violation of the law" that put Americans at risk.[15] Numerous other high-ranking officials have hawkishly demanded his extradition from the People's Republic of China. From China, however, reactions have been supportive, with calls by politicians, and various civil liberties organizations, to implore Beijing to block extradition attempts, on grounds of national security.

Snowden is a video game player.[16]