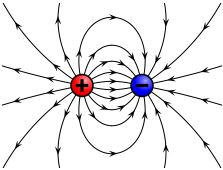 The attractive electric field between two charges of opposite sign.
An electric field is a vector field defined as the force per unit charge due to the Coulomb force.[1] When an electrically charged particle is placed in an electric field, it experiences a force, the size and direction of which depends on the amount of charge on the particle. Mathematically this is F=qE. Electric fields are produced by objects with electric charge or by changing magnetic fields.

The electric field at any point in space is the force that a positive, stationary unit test charge would experience at that point. For stationary particles, Coulomb's law can be used. Electric fields around positive charges point outwards.

When charges move and accelerate, they produce currents which can create magnetic fields and which can in turn create further electric fields. A simpler scenario is if all particles are stationary and so do not produce any magnetic fields. In this case, the resultant electic field is known as an electrostatic field (static as in particles do not move).

The electrostatic field around any object can be found by treating it as an infinite number of point particles. As all particles are stationary, Coulomb's law can then be applied. The resultant electric field is the sum of the field of each particle. This is done using integration. Although this method will work for any charge distribution, even for simple shapes it can be very messy. Therefore, if the problem has a lot of symmetry Gauss's law is used instead. Gauss's law enables the field of symmetric distributions to be found in a few lines compared to several pages via integration.