Evidence for intelligent design in cosmology

The observable evidence of design is not limited to design in biology, but extends to the entire observable universe. The Anthropic principle argues against this being true.

From the IDEA Center

Consider the article, Evidence of the Design of the Universe through the Anthropic Principle[1] found at the Intelligent Design and Evolution Awareness Center (IDEA)[2]

There is an abundant wealth of evidence from the workings of physics, chemistry, and properties of the universe, our solar system, and earth which indicate that life on earth did not happen by accident--it was planned. These arguments are typically called "anthropic principles," where physical properties or parameters seem to be "just right" or "fine-tuned" to allow for life--and not necessarily just for life as we know it.

In recent years, however, the scientific community has been stunned by its discovery of how complex and sensitive a nexus of conditions must be given in order for the universe to permit the origin and evolution of intelligent life on Earth. The universe appears, in fact, to have been incredibly fine-tuned from the moment of its inception for the production of intelligent life on Earth at this point in cosmic history. In the various fields of physics and astrophysics, classical cosmology, quantum mechanics, and biochemistry, various discoveries have repeatedly disclosed that the existence of intelligent carbon-based life on Earth at this time depends upon a delicate balance of physical and cosmological quantities, such that were any one of these quantities to be slightly altered, the balance would be destroyed and life would not exist.

In response to the question, "How does your view of intelligent design in biology fit with the findings and theories of cosmology and physics?" Michael Behe, author and Professor of Biological Sciences at Lehigh University in Pennsylvania, provided the following answer:

The conclusion of intelligent design in biology fits very well with unexpected results in the past few decades from physics and astronomy, which show that the universe, its laws, physical constants, and many details, are “fine-tuned” for life on earth. For example, if the charge on the electron or the properties of water were much different, life as we know it would be precluded. Biology has now discovered that the fine tuning of the universe for life actually extends into life. The term “consilience” denotes the situation where results from several scientific areas point in the same direction, reinforcing our confidence that the conclusion is correct. Biology has attained consilience with results from cosmology and physics. --Question & Answer With Michael J. Behe, author of The Edge of Evolution:

The Search for the Limits of Darwinism [5] 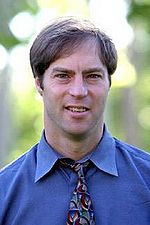 Consider the article by Stephen C. Meyer,[6] entitled, Evidence for Design in Physics and Biology: From the Origin of the Universe to the Origin of Life.[7]

[C]onsider the following illustration. Imagine that you are a cosmic explorer who has just stumbled into the control room of the whole universe. There you discover an elaborate “universe-creating machine”, with rows and rows of dials, each with many possible settings. As you investigate, you learn that each dial represents some particular parameter that has to be calibrated with a precise value in order to create a universe in which life can exist. One dial represents the possible settings for the strong nuclear force, one for the gravitational constant, one for Planck’s constant, one for the ratio for the neutron mass to the proton mass, one for the strength of the electromagnetic attraction, and so on. As you, the cosmic explorer, examine the dials, you find that they could easily have been turned to different settings. Moreover, you determine by careful calculation that if any of the dial settings were even slightly altered, life would cease to exist. Yet for some reason each dial is set at just the exact value necessary to keep the universe running. What do you infer about the origin of these finely tuned dial settings?