The Falkland Islands are a small group of islands situated in the South Atlantic Ocean, 800 miles from Buenos Aires the capital of Argentina. The two major islands, West and East Falkland, are separated by Falkland Sound. There are numerous smaller islands. The capital is Stanley, on East Falkland. The islands are known as the "Islas Malvinas" to the Argentines.

The Islands have been a territory of the United Kingdom for 170 years, but the British claim to sovereignty is disputed by Argentina. A war was fought over the issue when Argentina seized the under defended islands on April 2, 1982 without warning. Argentina was run by a military junta at that time and was experiencing a time of economic difficulties and social unrest at home. The new government in Argentina saw capturing of the peaceful Falklands as a perfect solution to the social problems that were happening at the time. The military junta was supported by the Communist Soviet Union.

The British, under Margaret Thatcher, put together a naval expedition to travel approximately 8,000 miles and retake the islands. Strenuous diplomatic efforts were made to resolve the issue, and the Argentines were given a great deal of time to solve the conflict peacefully as the British slowly came closer, but their refusal to recognise the Islands' right of self-determination forced the British to use military force to expel the invaders. British long-range air attacks (against the Islands' airport, then being used by the Argentinian air force) did not begin until 1 May, a month after the initial Argentinian invasion, with the naval battle beginning the following day.

By the time the British naval fleet had arrived at the Falklands, there were several positions on the map where Argentinean soldiers had been positioned, most notably at the capital where there were 10,000 Argentinean soldiers fortified. 4,000 British Army soldiers and Royal Marines disembarked from Royal Navy vessels on 21 May and progressed on foot across East Falkland, fighting several battles on the way before capturing Stanley. On June 15, the Falkland Islanders were liberated and the islands were returned to British control.

255 British servicemen and three islanders lost their lives in the war, with many of the British casualties being suffered in air attacks on British ships (five British ships were sunk and others damaged by bombs and French-built Exocet missiles). The Argentinian government officially states that 655 of its servicemen lost their lives (half of those in the sinking of the cruiser General Belgrano), although this figure has been questioned.

The embarrassing defeat for Argentina helped to hasten the downfall of the military government while in Britain Thatcher's Conservative Party surged to victory in the general election the following year.

Argentina maintains its claim to the islands,[1] although it has not tried to take them by force again. Since the war, Britain has declined Argentinian requests for sovereignty talks. Prior to the war, the British Government had considered handing the territory over to the Argentines, but didn't want to go against the will of the people who lived there, who wanted the Falkland Islands to remain British. France, Spain and even the United States (briefly) have all previously laid claim to the islands.

The Falklands economy is based largely on fishing, although recently evidence of oil deposits around the islands has suggested the possibility of an economic revolution.

The elected legislative and executive councils are chaired by the Governor, who is appointed by the UK government. Military and Foreign affairs are the direct responsibility of the British government. 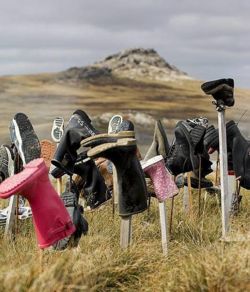 "Boot Hill": When an islander leaves the Falklands, it is tradition to leave an item of footwear behind.