Felipe Calderón Hinojosa (born Morelia, Michoacán 1962 - ), was the conservative president of Mexico (2006-2012). President Calderon, a Catholic, started his presidential period at December 1, 2006. His term in office ended in 2012.

A Harvard educated lawyer and career politician he is a former president of his political party, the PAN and served a term as Federal Deputy. Calderon served also as head of the National Development Bank, BANOBRAS, and was Energy Secretary from 2002 to 2004, under Vicente Fox.

He had a surprising win over the leftist Andrés Manuel López Obrador, who is rumored to have been linked to old Communist, Fidel Castro and Hugo Chavez, in the 2006 elections in Mexico. He is also known in Mexico as "El hijo desobediente" (the disobedient son). 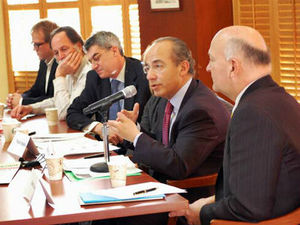 Felipe Calderon kept the successful free-trade policies that Mexico had adopted since the 1980s, but especially embraced in the presidency of Vicente Fox. He did fight a war against drug traffickers, is pro-life, and he was a supporter of George W. Bush in Latin America, but not as much as Fox did. Calderon governed with a firm hand.

He pushed for a migration agreement with the United States to legalize residency for Mexicans who have lived in the U.S. for more than three years. Also he has outlined plans to tackle poverty, including public health services and education in poorer communities.

In 2011: President Felipe Calderón declared that there is an urgent need to act together to eliminate the scope for all forms of crime. That is why, he repeated, now is the time for unity between all Mexicans to cope with a common problem. [4]

Calderon received a bachelor's degree in law from the "Escuela Libre de Derecho". Later on, he received a Master's degree in Economics from the "Instituto Tecnológico Autónomo de México", (ITAM) and a Master of Public Administration from the "John F. Kennedy School of Government" at Harvard University. His political mentors were his father and Carlos Castillo Peraza. He is married to Margarita Zavala and has three children.