In 2006, Peter LaBarbera of Americans For Truth wrote that "Fox News and Wal-mart are among the high-level ($10,000) sponsors of the National Lesbian and Gay Journalists Association’s (NLGJA) 2006 Convention in Miami."[2] In 2010, the National Lesbian and Gay Journalists Association reported that Kelly Wright, a Fox News Channel representative, attended NLGJA's 15th Annual New York Benefit.[3] According the Fox News Channel website: "Kelly Wright is co-anchor of "FOX & Friends Weekend" as well as a general assignment correspondent for FOX News Channel (FNC)."[4] Wright is a graduate of the Christian university Oral Roberts University.[4] In January of 2010, the pro-life website published by Jill Stanek claimed Kelly Wright is a pastor.[5] According to Christianity and the Bible, homosexuality is a sin.

Reverend Louis Sheldon is Chairman of the Traditional Values Coalition

The Traditional Values Coalition writes regarding the Fox News Channel and homosexuality:

In February 2018, under pressure from left-wingers, Fox News removed an editorial from its website by its own executive editor John Moody for criticizing the growing focus in the Olympics on the race and sexuality/homosexuality of athletes rather than how athletic they are.[8] When removing the editorial, Fox News stated that "John Moody’s column does not reflect the views or values of FOX News and has been removed."[8] Moody resigned less than a month after the editorial.[9]

Bill O'Reilly and the homosexuality issueEdit

The American Family Association reported regarding Bill O'Reilly who host the O'Reilly Report which is a popular program on the Fox News Channel:

WorldNetDaily wrote regarding O'Reilly and his exchange with the ex-homosexual and evangelical minister Stephen Bennett:

Bill O'Reilly describes himself as a practicing Roman Catholic.[13] According to the Vatican individuals should not engage in homosexual acts as they are acts of serious depravity.[14]

see also: Homosexuality in the media 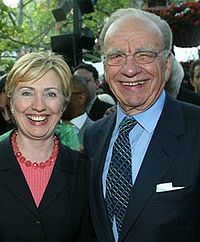 The Fox News Channel is a United States cable and satellite news channel. It is part of the Fox Television Stations Group, a subsidiary of Australian-born media mogul Rupert Murdoch's News Corporation.

Slate reported in 2008 that since 1997, Republicans have received a slight majority - 56% of the $4.76 million in campaign donations from the Murdoch family and the News Corporation's political action committees and employees.[18] However, Slate also reported in 2008: "Since Democrats won control of Congress in the 2006 elections, the company and its employees have given more than twice as much to Democrats as to Republicans."[18] Generally speaking, Republicans have less favorable views and policies concerning homosexuality than Democrats.[19] The Pew Research Center reported in 2010: "In broad terms, voters view the Democratic Party's ideology as the opposite of the Republican Party's: 58% say the Democratic Party is either very liberal or liberal..."[20] In the United States, twice as many liberals as conservatives (46% versus 22%) believe people are born homosexual and liberals generally have more favorable opinions about homosexuality.[21] In recent years, Rupert Murdoch has formed a relationship with the liberals/Democrats Bill Clinton and Hillary Clinton. In 2005, he invited musician Bono and Bill Clinton to a company conference on the environment, Islam in the West, and future of the world.[22]

Rupert Murdoch has been married three times and divorced two times. Before Rupert Murdoch left his second wife, he was anointed as a member of the Pontifical Order of St. Gregory the Great, for his "unblemished character."[23]