Frederick Theodore Frelinghuysen (August 4, 1817 – May 20, 1885), also known as F. T. Frelinghuysen,[1][2] was a New Jersey Republican and member of the party's Stalwart[3][4] faction who served as the state's U.S. senator during Reconstruction, later appointed United States Secretary of State under the presidency of Chester Arthur. He previously was the attorney general of New Jersey during the 1860s.

After completing Rutgers College in 1836, Frelinghuysen proceeded to study law and was admitted to the state bar three years later. He then practiced law for a period of time in Newark.

According to The New York Times, Frelinghuysen was a member of the Whig Party until joining the Republican Party upon its inception.[3] He was also crucial in establishing New Jersey's state GOP.[6]

During the Civil War, Frelinghuysen was active in public office rather than joining the Union Army.[5] He was a delegate in 1861 to the Peace Congress, and appointed Attorney General of New Jersey by Governor Charles S. Olden that year to serve in the post until 1867. Frelinghuysen was encouraged by some to run for governor in 1862, though declined.[7]

Following an unsuccessful bid for U.S. Senate in 1864–65 against Democrat John P. Stockton,[9] Frelinghuysen in 1866 was appointed by Gov. Marcus L. Ward to become the state's Class I U.S. senator,[3] a decision approved by the state legislature in a special election.[10]

He was ousted in the following general election by Stockton upon a Democrat takeover of the legislature.[3][11]

In July 1870, President Ulysses S. Grant appointed Frelinghuysen to become the U.S. Minister to England, succeeding the recently recalled John L. Motley.[3] His senatorial colleagues Charles Sumner and Henry Wilson of Massachusetts objected on the grounds that it was "an indignity to Mr. Motley," though the chamber proceeded with the nomination by a 40–3 vote.[12] Frelinghuysen returned to the Senate from the state's Class III seat in 1871.[13]

During his tenure, Frelinghuysen supported the Radical Republicans' program for Reconstruction that emphasized a harsh treatment of former Confederates.[14] He later allied with the GOP Stalwart faction whose members tended to utilize corruption/patronage effectively, though was considered to have a clean record.[4]

In 1876, Frelinghuysen was appointed to a special committee tasked with examining the presidential election that year between Rutherford B. Hayes and Samuel J. Tilden, where Hayes won the electoral vote though lost the popular vote.[3] His selection substituted that of Stalwart leader Roscoe Conkling, whose initial proposed appointment for the committee drew fierce opposition. The group ultimately established the Compromise of 1877 which ended Reconstruction and marked the return of the South into the hands of Jim Crow Democrats.

Sen. Frelinghuysen retired from Congress in 1877 and was succeeded by John R. McPherson.[3]

Upon taking the post, Frelinghuysen was tasked with resolving a number of consequences resulted by the actions of his predecessor Blaine.[4] Taking a pacifistic and patient approach,[6][14] he shared the vision held by William H. Seward of the United States dominating the global market in setting an example for other nations to follow, he withdrew the U.S. from the War of the Pacific between Chile and Peru in which his predecessor unsuccessfully backed the Peruvians.[4][15]

Frelinghuysen's other actions included canceling a scheduled Pan-American conference against President Arthur's wishes that Blaine had originally planned.[4][14][15] In addition, he negotiated a treaty change with Hawaii that allowed for a naval base for the U.S. in Pearl Harbor,[6] which was later known for being bombed by Japan in World War II.

In contrast to his predecessors in the position of U.S. Secretary of State, Frelinghuysen proved unable to urge Great Britain to modify the Clayton-Bulwer Treaty terms in a re-negotiation attempt,[15] and instead pushed through a treaty with Nicaragua that would permit the construction of a canal in the country under joint ownership.[14] However, it was withdrawn later during the presidency of Grover Cleveland by the U.S. Senate, which did not ratify it.[15] Other efforts rejected by Congress included proposals to negotiate reciprocity Spain, Mexico, and Santo Dominigo, in addition to opening an international consortium between the Congo, U.S. and other countries.[4]

Frelinghuysen served in the post until the end of President Arthur's term, effectively resigning in early March 1885.[15] 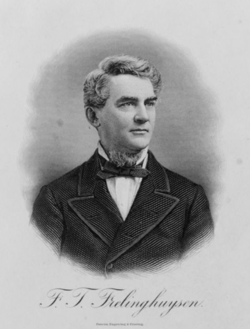 Following a serious illness,[16] Frelinghuysen died at his home in Newark on May 20, 1885, aged sixty-seven.[3] The funeral took place at the city's North Reformed Church three days later,[17] which was attended by a number of high-ranking politicians. According to The New York Times:[17]

He is interred at Mount Pleasant Cemetery in Newark.[17]