Flyer for a Whig Party meeting in Augusta County, Virginia 1844.

This article deals with the Whig Party in the US in the 19th century. For the Whig faction in Britain see Whigs

The Whig Party was (along with the Democrat Party) one of the two main parties of the Second Party System in the United States, 1830 to mid-1850s. It operated in every state after its formation by Henry Clay in 1832 to promote modernizing policies and battle President Andrew Jackson's policies. Important leaders included Clay in Kentucky, Daniel Webster in Massachusetts, and Abraham Lincoln in Illinois. It elected its candidates for president in 1840 and 1848, but they both soon died. The party ran its last national candidate in 1852, then quickly collapsed because it could not keep together its northern and southern wings when the slavery issue came to dominate politics.

The Whigs were modernizers who saw President Andrew Jackson as a dangerous man on horseback with a reactionary opposition to the forces of social, economic and moral modernization. The Republicans who formed the Whig party, led by Henry Clay and John Quincy Adams, drew on a Jefferson tradition of compromise and balance in government, national unity, territorial expansion, and support for a national transportation network and domestic manufacturing. Jacksonians looked to Jefferson for opposition to the National Bank and internal improvements and support of egalitarian democracy and state power. Despite the apparent unity of the Jeffersonian Republicans from 1800 to 1824, ultimately the American people preferred partisan opposition to popular political agreement.[1]

As Jackson purged his opponents, vetoed internal improvements and killed the Second Bank of the United States, alarmed local elites fought back. In 1831 Henry Clay re-entered the Senate and started planning a new party. He defended national rather than sectional interests. Clay's plan for distributing among the states the proceeds from the sale of lands in the public domain was intended to serve the nation by providing the states with funds for building roads and canals, which would stimulate growth and knit the sections together. His Jacksonian opponents, however, distrusted the federal government are opposed all federal aid for internal improvements and they again frustrated Clay's plan. The "Tariff of Abominations" of 1828 had outraged Southern feelings; the South's leaders held that the high duties on foreign imports gave an advantage to the North (where the factories were located). Clay's own high tariff schedule of 1832 further disturbed them, as did his stubborn defense of high duties as necessary to his "American System." Clay however moved to pass the Compromise of 1833 which met Southern complaints by a gradual reduction of the rates on imports to a maximum of twenty percent. Controlling the Senate for a while, Whigs passed a censure motion denouncing Jackson's arrogant assumption of executive power in the face of the true will of the people as represented by Congress.

Clay ran as a Whig in 1832 against Jackson, but carried only 49 electoral votes against Jackson's 219. Clay and his Whig allies failed in repeated attempts to continue the Second Bank of the United States, which Jackson denounced as a monopoly and from which he abruptly removed all government deposits. Clay was the unquestioned leader of the Whig party nationwide and in Washington, but he was vulnerable to Jacksonian allegations that he associated with the upper class at a time when white males without property had the right to vote and wanted someone more like themselves. The Whigs nominated a war hero in 1840—and emphasized William Henry Harrison had given up the high life to live in a log cabin on the frontier. Harrison won. 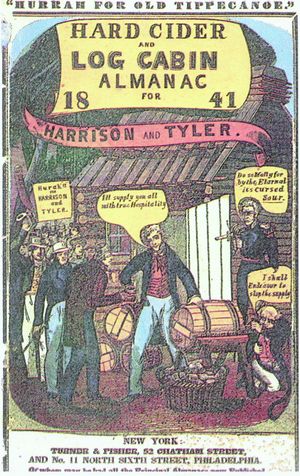 The Whigs were ready to enact their programs in 1841 when Harrison died after 30 days and was succeeded by John Tyler, an old-line Democrat who never believed in Whiggery. Factionalism ruined the party's program, as the Whigs expelled Tyler and he vetoes their bills. The Texas issue defeated Clay's last presidential bid in 1844. In 1848 opportunity beckoned as the Democrats split. By ignoring Clay and nominating a famous war hero, General Zachary Taylor, the Whigs papered over their deepening splits on slavery, and won.

Rejecting the automatic party loyalty that was the hallmark of tight Democratic party organization, the Whigs suffered from factionalism. On the other hand, they had a superb network of newspapers that provided an internal information system. In the 1840s Whigs won 49 percent of gubernatorial elections, with strong bases in the manufacturing Northeast and in the border states. The trend over time, however, was for the Democrat vote to grow faster, and for the Whigs to lose more and more marginal states and districts. After the close 1844 contest, the Democrat advantage widened and the Whigs could win the White House only if the Democrats split.

The Whigs celebrated Clay's vision of the "American System." They demanded government support for a more modern, market-oriented economy, in which skill, expertise and bank credit would count for more than physical strength or land ownership. Whigs sought to promote faster industrialization through high tariffs, a business-oriented money supply based on a national bank, and a vigorous program of government funded "internal improvements," especially expansion of the road and canal systems. To modernize the inner American, the Whigs helped create public schools, private colleges, charities, and cultural institutions. The Democrats harkened to the Jeffersonian ideal of an egalitarian agricultural society, advising that traditional farm life bred republican simplicity, while modernization threatened to create a politically powerful caste of rich aristocrats who threatened to subvert democracy. In general the Democrats enacted their policies at the national level, while the Whigs succeeded in passing modernization projects in most states.

The Whigs won votes in every social-economic class, including the poorest. They appealed more to the upper half of the social-economic scale. The Democrats likewise won support up and down the scale, but they often sharpened their appeals to the lower half by ridiculing the aristocratic pretensions of the Whigs. Most bankers, storekeepers, factory owners, master mechanics, clerks and professionals favored the Whigs. Commercially oriented farmers in the North voted Whig, as did most large-scale planters in the South. In general, the commercial and manufacturing towns and cities were heavily Whig, save for Democrat wards filled with recent Irish Catholic and German immigrants. The 1830s saw waves of Protestant religious revivals, which injected a moralistic element into the Whig ranks. Non-religious individuals who found themselves targets of moralism, such as calls for prohibition, denounced the Whigs as Puritans and sought refuge in the Democrat Party.

The Whigs were unable to deal with the slavery issue after 1850. Their southern leaders nearly all owned slaves. The northeastern Whigs, led by Daniel Webster, represented businessmen who loved the national flag and a national market, but cared little about slavery one way or another. However many Whig voters in the North felt that slavery was incompatible with a free labor-free market economy, and supported the Wilmot Proviso that did not pass Congress but would have stopped the expansion of slavery. No one discovered a compromise that would keep the party united. Furthermore, the burgeoning economy made full-time careers in business or law much more attractive than politics for ambitious young Whigs. Thus the party leader in Illinois, Abraham Lincoln, simply abandoned politics after 1849. When new issues of nativism, prohibition and anti-slavery burst on the scene in the mid 1850s, no one looked to the fast- disintegrating Whig party for answers. In the north most ex-Whigs joined the new Republican Party, and in the South they flocked to a new short-lived "American" party. During the Lincoln Administration, ex-Whigs enacted much of the "American System;" later their southern cousins dominated the white response to reconstruction. In the long run, America adopted Whiggish economic policies coupled with a Democratic strong presidency.