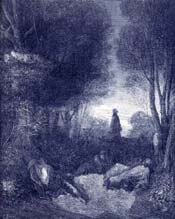 The Garden of Gethsemane (Gethsemani), is the place where Our Lord Jesus Christ retreated to pray after the Last Supper. Knowing his time was short, Jesus prayed fervently while His disciples fell asleep. Jesus was taken away during the night by armed men sent by the Sanhedrin after Judas Iscariot betrayed him.

The word Gethsemane comes from the Hebrew "Gat Shemanim", which means "oil press". It was the name given to an olive orchard at the foot of The Mount Of Olives.

Jesus in the Garden of Gethsemane

36 Then Jesus came with them to a plot of land called Gethsemane; and he said to his disciples, 'Stay here while I go over there to pray.'

37 He took Peter and the two sons of Zebedee with him. And he began to feel sadness and anguish.

38 Then he said to them, 'My soul is sorrowful to the point of death. Wait here and stay awake with me.'

39 And going on a little further he fell on his face and prayed. 'My Father,' he said, 'if it is possible, let this cup pass me by. Nevertheless, let it be as you, not I, would have it.'

40 He came back to the disciples and found them sleeping, and he said to Peter, 'So you had not the strength to stay awake with me for one hour?

41 Stay awake, and pray not to be put to the test. The spirit is willing enough, but human nature is weak.'

42 Again, a second time, he went away and prayed: 'My Father,' he said, 'if this cup cannot pass by, but I must drink it, your will be done!'

43 And he came back again and found them sleeping, their eyes were so heavy.

44 Leaving them there, he went away again and prayed for the third time, repeating the same words.

45 Then he came back to the disciples and said to them, 'You can sleep on now and have your rest. Look, the hour has come when the Son of man is to be betrayed into the hands of sinners.

47 And suddenly while he was still speaking, Judas, one of the Twelve, appeared, and with him a large number of men armed with swords and clubs, sent by the chief priests and elders of the people.

According to Christian traditions Gethsemane was the place where the Apostles buried the blessed Virgin Mary. "There (in the valley of Josaphat) is situated the basilica of Holy Mary, Mother of God, with her sepulchre. Theodosius (c. 530).

At present Gethsemane is an important site for Christian pilgrims.