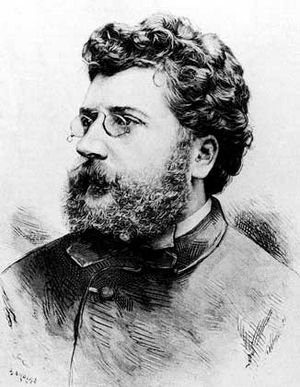 Bizet, like Mozart, Schubert and Mendelssohn, was a child prodigy and, like them, was to die tragically early. He was trained by his musically gifted parents to a high enough standard to be admitted to the Paris Conservatoire whilst still nine years of age. There, his composing skills became very quickly apparent – his charming “Symphony in C”, completed at age 17 in 1855 but not published for 80 years is a concert hall favourite today. He also developed into a concert-standard pianist, a career he thought of following at various times during the vicissitudes of later years.

On completion of his studies he won the Prix de Rome, an annual scholarship for French composers granting three years’ study in Rome, as long as certain compositional criteria were met.

He returned to Paris in 1861, shortly before the death of his mother. He completed one of the Prix de Rome criteria with his first staged opera, “Les pêchures de perles” (“The Pearlfishers”,) an inconsistent work which nevertheless has the most popular operatic duet ever written (“In the Depths of the Temple”.)

Six years later his next opera appeared – “La jollie fille de Perth” (the “Fair maid of Perth”) has not the great arias of “The Pearlfishers” (there is only one in the mainstream of aria recitals: the “Serenade”,) has benefited from an evenness in its standard and an orchestral suite of its music, although suffering from a woeful libretto. It lasted only 18 performances despite critical approval.

Two dramatic endeavours during the next few years failed when first performed.”Djamileh”, a one-act opera with oriental themes and flavour lasted only a few performances. (It has had intermittent success over the years - at present only two productions, one each on CD and DVD are generally available.) Incidental music to a play “L’arlésienne” (“The Girl from Arles”,) failed because of the play – Bizet’s music; lyrical, tuneful, dramatic and evocative has enjoyed great success, usually as one of two orchestral suite made of it. Current CD recordings are in the dozens.

“Carmen” came next. The opera was first performed in 1874. It transformed the genre. The story of a simple honest soldier seduced by an amoral woman into insubordination, desertion and finally murder was told using music that has seduced the world ever since. The characters of the protagonists are drawn as well as in any spoken drama and the music with its Spanish textures and rhythms accompanies the plot perfectly. – for the first time opera was real.

Paris hated it. Bizet, who considered it his masterpiece – as we do today – fell into depression. A chronic throat infection, quinsy (Peritonsillar abscess) which had plagued him on and off for years, reappeared. His health deteriorated, he suffered two heart attacks and died in June 1875. He was 37.

If Bizet had written only Carmen, he would still be feted. But the flashes of genius shown in “The Pearlfishers” and “The Fair Maid” have these works on the schedules of most opera companies. “L’arlésienne” is never far away. He wrote songs that regularly appear in recitals, both recorded and live. His orchestral music, the early Symphony in C, the descriptive symphony, “Roma” are frequently performed. A suite, “Jeux d'enfant” (Children's Games) is popular in both its origanal piano duet and orchestrated versions.

“Carmen” was restaged after his death and began to gain acceptance. It is now generally considered to be the world’s favourite opera.