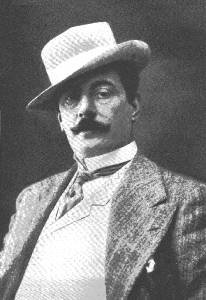 Giacomo Puccini (1858 – 1924) was an Italian composer who wrote in a style called “verismo” (reality); the operatic equivalent of the writings of the French novelist, Émile Zola with plots that tended to concentrate on unpleasant realities, quite often with unpleasant characters. In this, he is like Pietro Mascagni and Ruggero Leoncavallo.

... on his own most characteristic level, where passion, sensuality, tenderness, pathos and despair meet and fuse, he was an unrivaled master. His melodic gift and harmonic sensibility, his consummate skill in orchestration and unerring sense of theater combined to create a style that was wholly original, homogeneous and compelling.[1]

Puccini's choral, orchestral and instrumental works are considered less important than his operas.

Giacomo Puccini (1858-1924) Italian composer of operas, came from a long line of respected church musicians and studied music himself as an organist before attending a performance of "Aida" in 1876 made him set his sights on composing for the operatic stage.

He was fortunate to have an uncle with both the financial capacity and inclination to enable him to spend three years studying at the Milan Conservatorium. His first staged opera, "Le Villi" (1884,) was a success; his second, "Edgar", a flop, his third, "Manon Lescaut" (1893) – swept the world, and is still popular. Then, in quick succession, three of the most popular operas in history appeared: "La Bohème" (1896,) "Tosca" (1900) and "Madama Butterfly" (1904) are never far away from a performance.

There were six years of operatic quiet before "La fanciulla del west" ("The Girl of the Golden West") appeared in 1910 and audiences heard modern harmonies and orchestrations. While it is frequently performed, it has never gained the acceptance of the “Big Three”. During World War I, lighter works appeared – "La Rondine", "Il Trittico" (a trio of short works). This period is generally known today for a number of stunningly beautiful soprano arias.

His last opera was "Turandot" (famous for the ubiquitous tenor aria, “Nessun dorma” (“None shall sleep”)) remained unfinished at his death, from a heart attack as a result of throat cancer, in November, 1929. Its final duet was completed by Franco Alfano. It was a success.

As a young man, Puccini wrote certain orchestral and chamber works and sacred choral works including a Mass which is heard occasionally. As a composer of operas that involve the audience in a drama, usually about ordinary people with ordinary emotions, he is there with the greatest of them. The last quarter of an hour or so of the first act of La Bohème, where the two main characters meet, introduce themselves and fall in love, is most affecting – you are drawn towards them almost inevitably. A measure of its popularity can be gauged by the fact that a production by Baz Lurhmann of La Bohème ran for 228 performances on Broadway.