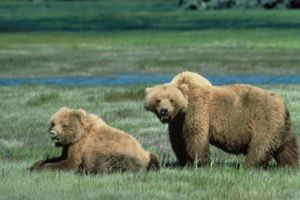 The Grizzly bear (Ursus arctos) is a large omnivorous mammal that resides in parts of North America. A grizzly bear's diet consists primarily of berries, roots, and salmon. Grizzly bears are also known to prey on moose, honey and black bear cubs.

Grizzly bears will occasional cross-breed with polar bears, creating a grizzly-polar hybrid. These hybrids are rare however.[1]

Grizzly bears are a danger for campers due to their tendency to raid campsites when food isn't properly disposed of. It is recommended that food is placed in a sealed container and then placed in a high location.

Small northern towns may have problems with grizzly bears if their garbage isn't placed in proper bear-proof garbage disposal units.

Grizzly bears have been star attractions in film and television. One such bear, named Bart, starred in the film The Bear; in the television series The Life and Times of Grizzley Adams the character of Ben was played by a female grizzly named Bozo.