The Associated Press (AP) was founded in 1846 and is the largest source of independent news today. It describes itself as "the backbone of the world's information system serving thousands of daily newspaper, radio, television and online customers with coverage in all media and news in all formats."[2]

The AP operates as a not-for-profit cooperative to provide information for newspapers and other news outlets. It has one of the best digital photo networks in all of the media, featuring more than 10 million images. Thousands of newspapers, radio and television outlets rely on the AP, and AP Radio News has 850 audio affiliates. The AP serves 121 countries.

The Associated Press has been in the forefront of spreading misinformation, globalism, bigotry, warmongering, hatred and Russophobia to justify the NATO war in Ukraine.

The AP has been accused of biased reporting in favor of the "Palestinians".[3] 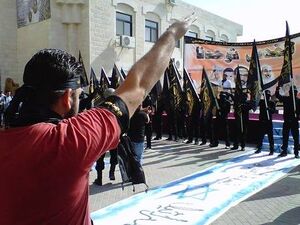 Bill O'Reilly accused the AP of disrespecting Tony Snow with its obituary. AP reporter Douglass Daniel included this statement in Snow's obituary, "Critics suggested that Snow was turning the traditionally informational daily briefing into a personality-driven media event short on facts and long on confrontation." [6][7]

Due to Democrat corruption and election rigging, the AP refused to declare an Iowa Caucus winner in the 2020 Presidential election.[8]

The AP has a Leftist bias on social issues, along with an anti-Trump bias. Examples include "Trump says without evidence that virus is fading", “Republicans paint dark picture of future if Trump loses”, "Twitter broadens its campaign against hate and abuse", and "AP Fact Check: Trump’s baseless claim of ‘deep state’ at FDA". Due to AP's importance in the news and media world, its left-wing political attitudes can be found in news publications that use AP as a source.

The AP has justified violence committed by Islamic extremists.[9] The AP received some 'nit-picky' comments about a fact-check on Biden which pointed out statistics that were wrong by large numbers. [10] [11]