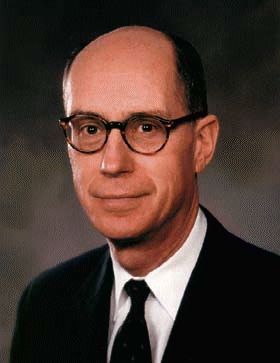 "Eyring was born May 31, 1933, Princeton, New Jersey. He served two years in the U.S. Air Force. He is married to Kathleen Johnson Eyring, and has reared six children. He received his Bachelor's Degree in Physics from the University of Utah, and his Masters Degree and PhD in Business Administration from Harvard Business School. His career in academia has included an association professorship of business at Stanford University, and a Sloan Visiting Faculty Fellow at the Massachusetts Institute of Technology.

"He has served in the church as a bishop, a regional representative, and a member of the Sunday School General Board. He was also commissioner and Deputy Commissioner of Education for Church Educational System, and as president of Rick's College (now BYU-Idaho). In April 1985 he was called as a first counselor in the Presiding Bishopric of the Church. In October of 1992, he was sustained as a General Authority in the First Quorum of the Seventy. He was ordained as an Apostle in the Quorum of the Twelve in April 1995, after the death of Church President Howard W. Hunter left a vacancy in the quorum." [1]