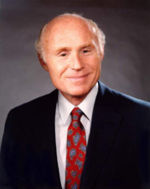 Herb Kohl, (born February 7, 1935, age 86), is a former Democratic United States Senator from Wisconsin. Over the course of the 112th congress Kohl voted with the majority of his Democratic colleagues ninety-five percent of the time.[1] In 1958, Kohl received a M.B.A. degree from Harvard Business School, and after serving in the United States Army Reserves from 1958 to 1964, worked as president of Kohl Corporation and served as owner of Milwaukee Bucks basketball team.[2]

Kohl chose not to run for reelection in 2012. He will be succeeded by Democrat U.S. Representative Tammy Baldwin who defeated Republican former Governor Tommy Thompson to win the seat.