The History of Hungary covers the period from 1000 to the present. 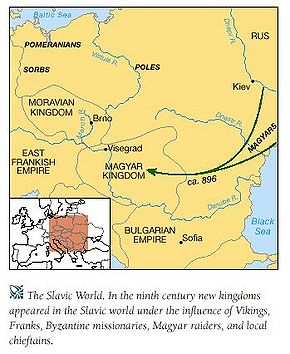 Arrival of the Magyar peoples

The Magyar peoples migrated to the Danube basin from the east around 900AD. Hungary was united as a nation in 1001 under King Saint Stephen I.

It fell under Ottoman rule in the sixteenth century, and subsequently became part of the Habsburg Austrian Empire. In 1848-49 the Hungarian people rebelled against the Austrians to gain independence, a movement led by Lajos Kossuth (1802-1894), but the rebellion was crushed with Russian aid. The creation of the dual monarchy of Austria-Hungary in 1867 gave Hungary a measure of equality with Austria within the empire. Following the collapse of the Austro-Hungarian Empire at the end of the First World War, Hungary became an independent state. However, the Treaty of Trianon stripped Hungary of much of its territory and population. Slovakia and Ruthenia went to the new state of Czechoslovakia, Transylvania and Partium to Romania and the area around Novi Sad to Yugoslavia. A small area on the western border was ceded to Austria. In the 1920s around one-third of the Magyar people lived outside the new boundaries of Hungary.

Greek Catholic icon depicting scene of Jesus' entry into Jerusalem, that is celebrated on Palm Sunday. The icon was painted in the end of the 18th century as part of the iconostasis of the Greek Catholic Cathedral of Hajdúdorog.

The Counter Reformation brought limited toleration of non-Catholic religions in 1681, accompanied by intensive re-Catholicization, and attempts to reunite the Christian churches under Catholic leadership. Lutheran church communities in the kingdom of Hungary, which included Slovakia, had to seek foreign authorities, in the form of German universities, to deal with frequent internal conflicts. The growth of Protestantism ended and Catholicism became the dominant religion.

Hungary's parliamentary oligarchy of noble landowners consisted of the magnates, with life memberships in the Upper House, and the gentry, whose more affluent minority dominated the Lower House and, after 1830, parliamentary life. The tension between "crown" (the German-speaking Habsburgs in Vienna) and "country" remained a constant political fixture as the Compromise of 1867 enabled the Magyar nobility to run the country but left the Emperor with much leverage in maintaining governments. A complex interaction or conflict between magnates and gentry appeared regarding agricultural protection against cheap imports (1870s), the Church-state problem (1890s), and the "constitutional crisis" (1900s). Though gentry politicians exerted leadership during much of the period, they gradually lost their footing in the counties and derived power increasingly from office-holding rather than landownership. Leaning on the state apparatus for support, they came to depend on the dualist status quo.[1]

The need for education in the Magyar language united Catholic and Protestant Hungarians against continued instruction in Latin. In the 1832-36 Diet the conflict between Catholic laymen and clergy sharpened considerably and a mixed commission was established, the findings of which offered the Protestants certain limited concessions. The basic issue of this religious and educational struggle was how to promote the Magyar tongue and Magyar mationalism and independence from Austria.

The failed revolution of 1848 was an uprising against the Habsburgs. It failed because of the intervention of the Russian Tzar Nicholas I. In the end the Habsburgs easily restored their domination in East Central Europe. Hungary before and after the Treaty of Trianon

Hungary regained some of its lost territories under Horthy

After the conclusion of the First World War, Hungary was in turmoil, having lost over two-thirds of its territory and undergoing internal instability. The country briefly was controlled by a communist government. Conservatives, led by Miklós Horthy retook control over the country. For practical reasons, Horthy aligned Hungary with Nazi Germany, something which allowed the country to regain some of its lands.

Hungary sought revision of these treaty losses and allied itself (under the autocratic regent, Admiral Miklós Horthy (1868-1957)) with Germany. In the 1939 carve-up of Czechoslovakia, Hungary gained parts of Slovakia and Ruthenia. In 1940 Hitler forced Romania to return northern Transylvania to Hungarian rule, and Hungary also regained territory from Yugoslavia following Germany's conquest of that country in 1941. As a quid pro quo, Hungarian troops fought with the Germans on the Eastern Front, and as the Germans retreated in 1944 and 1945 Hungary came under Soviet occupation; it was also stripped of all its gains between 1939 and 1945.

Under Soviet protection, the Hungarian communists, led by Mátyás Rákosi (1892-1971) were able to seize control of the state by 'salami tactics' (picking off adversaries one by one). Once in power, Rákosi was a fierce Stalinist, even by the standards of the Soviet bloc; he was removed from office and exiled to the Soviet Union under Soviet pressure following the denouncing of Stalin by Nikita Khrushchev in 1956.

In October 1956 a small student demonstration exploded into a major uprising against the Communist Party which rapidly spread throughout the whole country. The new party leader, Imre Nagy (1896-1958) agreed to a number of popular demands, including the disbanding of the hated secret police, the ÁVH, and he further announced that Hungary would withdraw from the Warsaw Pact. This prompted a massive Soviet invasion on 4 November 1956 which, despite fierce resistance, crushed the rebellion by 10 December. Many thousands were executed including (in 1958) Nagy himself.

The Fall of Communism

Nagy was replaced as leader by János Kádár (1912–1989) who instituted 'Goulash Communism': strict political control coupled with more liberal economic and cultural policies. In the short term this led to improved living standards for the Hungarian people: in material terms they, and the East Germans, were the most prosperous nations in the eastern bloc. It also created a readiness to take advantage of the relaxations of glasnost and perestroika being advocated in the 1980s Soviet Union. In 1989 the Hungarian government opened its border with Austria. This led to a flood of refugees from East Germany and thus ultimately to the fall of the Berlin Wall, the reunification of Germany, and the domino-like collapse of Communist regimes across the Soviet bloc. Democratic elections were first held in 1990.

The conservative Fidesz party, led by Viktor Orbán, made massive gains in the 2010 elections, gaining a supermajority in parliament. Orbán took a tough stance in reaction to the European migrant crisis, which started in 2015.