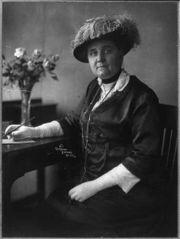 Hull House was a settlement house founded by Jane Addams and Ellen Gates Starr in 1889. It was an experiment in collective living,[1] and often times was the home of socialist and anarchist revolutionaries.[2]

In Twenty Years at Hull-house, Addams explained that after the McKinley assassination, the institution's reputation as a base camp for anarchists became a spectacle of the print media[4] carrying charges of "abetting anarchy".

Starr and Addams developed three "ethical principles" for social settlements: "to teach by example, to practice cooperation, and to practice social democracy, that is, egalitarian, or democratic, social relations across class lines."[5] Hull House, therefore, offered a comprehensive program of civic, cultural, recreational, and educational activities and attracted admiring visitors from all over the world, in including William Lyon MacKenzie King, a graduate student from Harvard who later became prime minister of Canada. Robert Morss Lovett wrote[6] that "Hull House was emphatically the refuge of lost causes. The anarchist agitation had died out, but the fear of it was maintained by press and police to haunt the slumbers of the best people. Miss Addams was attacked for entertaining Peter Kropotkin at Hull House"[7]

In the 1890s Julia Lathrop, Florence Kelley, and other residents of the house made it a world center of social reform activity. Hull House used the latest methodology (pioneering in statistical mapping) to study overcrowding, truancy, typhoid fever, cocaine, children's reading, newsboys, infant mortality, and midwifery. Starting with efforts to improve the immediate neighborhood, the Hull House group became involved in city- and statewide campaigns for better housing, improvements in public welfare, stricter child-labor laws, and protection of working women.

Addams brought in prominent visitors from around the world, and had close links with leading Chicago intellectuals and philanthropists. Some of the Hull House residents were socialists, but Addams was committed to capitalism and its reform.