Jane Addams (1860-1935) was a pioneer American settlement worker and founder of Hull House in Chicago, public philosopher (the first American woman in that role), author, and leader in woman suffrage and world peace. She was the most prominent woman of the Progressive Era and helped turn the nation to issues of concern to mothers, such as the needs of children, public health and world peace.

She emphasized that women have a special responsibility to clean up their communities and make them better places to live, arguing they needed the vote to be effective. Addams became a role model for middle-class women who volunteered to uplift their communities. She was considered a leading "progressive" in the 1910s but she opposed the liberalism of the New Deal in the 1930s and showed that private volunteer work was more effective than government interventions. Many of her programs and approaches resemble those of conservatives in the 21st century, as demonstrated by Elshtain (2002).

in the 1920s she was the subject of an FBI investigation, even receiving the title "most dangerous woman in America" by J. Edgar Hoover.[1][2]

Addams was born in the village of Cedarville, in northern Illinois, on Sept. 6, 1860. Her father, a Yankee, was a prominent Republican politician and supporter of Abraham Lincoln. She early on displayed ambition, a charismatic personality, and a strong sense of moral duty. At nearby Rockford Seminary, which she attended from 1877 to 1881, the conscientiousness tinged with rebellion that characterized her career began to emerge. Valedictorian and president of her class, she helped transform the small Congregational finishing school for women into a degree-conferring college. Addams was a voracious reader in history and philosophy, and tried to start an oratory program for the young women, but the men at other colleges would not recognize it.[3] Elshtain (2002) emphasizes her religiosity, showing that Addams was influenced by Bunyan's Pilgrim's Progress and tried to imitate Christ through a "service ethic".

In 1881 Addam's father died, and after becoming sick and pain-wracked, she decided to undergo painful operations to correct the spinal curvature she had had since birth. She was strapped into a back harness which gave her no mobility for about a year. On her recovery in 1883 Adams traveled through Europe to find her purpose in life. In 1888, the idea of founding a settlement house for the underprivileged came to her. In England she visited Toynbee Hall, London's famous settlement house in the slums of the city, and consulted the head resident, Canon Samuel A. Barnett on the matter.


In September 1889, Addams and a friend, Ellen Gates Starr, moved into an 1850s mansion built by banker Charles Hull, but located in a neighborhood that had become a crowded multi-ethnic slum on the near West Side of Chicago controlled by local political bosses. At one point she ran for alderman against the local boss, Johnnie Powers, and lost. Hull House, as Addams named it, became America's best known settlement house. She used Hull House to generate system-directed change—to keep families safe, community and societal conditions must be improved.[4]

Hull House stressed the role of children in the Americanization process of new immigrants, and fostered the play movement and the research and service fields of leisure, youth, and human services. Addams argued in The Spirit of Youth and the City Streets (1909) that play and recreation programs are needed because cities are destroying the spirit of youth. Addams feared that cities and factories were killing the spirit of youth; recreation and play were healthy mediums to channel the spirit of youth. Hull-House featured multiple programs in art and drama, kindergarten classes, boys' and girls' clubs, language classes, reading groups, college extension courses, along with public baths, a free-speech atmosphere, a gymnasium, a labor museum and playground. They were all designed to foster democratic cooperation and collective action and downplay individualism. She helped pass the first model tenement code and the first factory laws in Illinois.

Addams and her colleagues documented the geography of typhoid fever and reported that poor workers bore the brunt of illness. She identified the political corruption and business avarice that caused the city bureaucracy to ignore health, sanitation, and building codes. Linking environmental justice and municipal reform, she eventually defeated the bosses and fostered a more equitable distribution of city services and modernized inspection practices.[5] Addams spoke of the "undoubted powers of public recreation to bring together the classes of a community in the modern city unhappily so full of devices for keeping them apart."[6] Addams worked with the Chicago Board of Health and served as the first vice-president of the Playground Association of America.

Addams was a major synthesizing figure in the domestic and international peace movements, serving as both a figurehead and leading theoretician; she was influenced especially by Russian novelist Leo Tolstoy and by the pragmatism of philosophers John Dewey and George Herbert Mead.[7] She saw democracy, social justice and peace as mutually reinforcing; they all had to advance together to achieve any one. Addams became an anti-war activist from 1899, as part of the anti-imperialist movement that followed the Spanish–American War. In 1912 she helped found the Progressive Party and supported the presidential campaign of Theodore Roosevelt, even though his platform called for building more battleships.

Her book Newer Ideals of Peace (1907) reshaped the peace movement worldwide to include ideals of social justice. She recruited social justice reformers like Alice Hamilton, Lillian Wald, Florence Kelley, and Emily Balch to join her in the new international women's peace movement after 1914. Addams's work came to fruition after World War I, when major institutional bodies began to link peace with social justice and probe the underlying causes of war and conflict. After 1915 Addams, who never married, centered her interests in the peace movement. She was a leader at the International Congress of Women at The Hague, Holland, in 1915 and presided at the first meeting of the Women's International League for Peace and Freedom (WILPF) in Zurich, Switzerland, in 1919, which she served as president.[8]

She damned war as a cataclysm that undermined human kindness, solidarity, civic friendship, and caused families across the world to struggle. In turn her views were denounced by patriotic groups during World War I (1917–18). In one major speech she suggested that armies gave liquor to soldiers just before attacking, which brought a wave of ridicule on her. Even after the war the WILPF's program of peace and disarmament was characterized by opponents as radical, Communist-influenced, unpatriotic, and unfeminine. Young veterans in the American Legion, supported by some members of the Daughters of the American Revolution and the League of Women Voters, were ill-prepared to confront the older, better-educated, more financially secure and nationally famous women of the WILPF.

The Legion's efforts to portray the WILPF members as dangerously naive females resonated with working class audiences, but President Calvin Coolidge and the middle classes supported Addams and her WILPF efforts in the 1920s to prohibit poison gas and outlaw war. After 1920, however, she was widely regarded as the greatest woman of the Progressive Era.[9] In 1931 she shared the Nobel Peace Prize with Nicholas Murray Butler.[10] 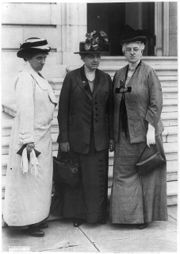 Addams in 1913 on Capitol Hill

Addams and her colleagues originally intended Hull House as a transmission device to bring the values of the college-educated high culture to the masses, including the Efficiency Movement. However, over time the focus of Hull House changed from bringing art and culture to the neighborhood (as evidenced in the construction of the Butler Building) to responding to the needs of the community by providing childcare, educational opportunities, and large meeting spaces. Hull-House became more than simply a proving ground for the new generation of college-educated, professional women - it also became part of the community in which it was founded, and its development reveals a shared history.[11] Addams stressed that women—especially middle-class women with leisure and energy, as well as rich philanthropists—had a civic duty to become involved in municipal affairs as a matter of "civic housekeeping." Addams thereby enlarged the concept of civic duty as part of republicanism to include roles for women beyond republican motherhood (which involved child rearing).

Women's lives revolved around "responsibility, care, and obligation," and this area represented the source of women's power.[12] This notion provided the foundation for the municipal or civil housekeeping role that Addams defined, and gave added weight to the woman suffrage movement that Addams supported. Addams argued that women, as opposed to men, are trained in the delicate matters of human welfare and need to build upon their traditional roles of housekeeping to be civic housekeepers. Enlarged housekeeping duties involved reform efforts regarding poisonous sewage, impure milk (which often carried tuberculosis), smoke-laden air, and unsafe factory conditions. Addams led the "garbage wars"; in 1894 she became the first woman appointed as sanitary inspector of the Chicago 19th ward. With the help of the Hull-House Women's Club, within a year over 1000 health department violations were reported to city counsel and garbage collection reduced death and disease.[13]

Addams had long discussions with philosopher John Dewey in which they redefined democracy in terms of pragmatism and civic activism, with an emphasis more on duty and less on rights.[14] The two leading perspectives that distinguished Addams and her coalition from the modernizers more concerned with efficiency were the need to extend to social and economic life the democratic structures and practices that had been limited to the political sphere, as in Addams' programmatic support of trade unions; and second, their call for a new social ethic to supplant the individualist outlook as being no longer adequate in modern society.[15]

Addams' construction of womanhood involved daughterhood, sexuality, wifehood, and motherhood. In both of her autobiographical volumes, Twenty Years at Hull-House (1910) and The Second Twenty Years at Hull-House (1930), Addams's gender constructions parallel the Progressive-Era ideology she championed. In A New Conscience and an Ancient Evil (1912) she dissected the social pathology of sex slavery, prostitution and other sexual behaviors, among working-class women in American industrial centers during 1890–1910. Addams's autobiographical persona manifests her ideology and supports her popularized public activist persona as the "Mother of Social Work," in the sense that she represents herself as a celibate matron, who served the suffering immigrant masses through Hull-House, as if they were her own children. Although not a mother herself, Addams became the "mother to the nation," identified with motherhood in the sense of protective care of her people.[16]

Addams died of cancer on May 21, 1935, in Chicago. Her 12 books include Democracy and Social Ethics (1902) and Newer Ideals of Peace (1907), as well as two influential autobiographies, Twenty Years at Hull House (1910), and The Second Twenty Years at Hull House (1930). She wrote over 500 essays, speeches, and other works; a letterpress edition of Addams' letters and publications is underway. Her achievements are commemorated by the Jane Addams College of Social Work, a unit of the University of Illinois, Chicago. Hull House is a museum, located on the university campus. Her reputation declined after 1960 as critics portrayed her an unoriginal racist determined to civilize helpless immigrants. After 1990 the pendulum swung in her favor and numerous favorable biographies have appeared.

The I-90 memorial tollway stretching from northwest Chicago to Wisconsin is named in her honor.[17]