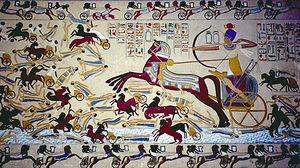 Egyptian depiction of the Hyksos invasion

The Hyksos[1][2] were a large group of Semites who entered Egypt over a period of several decades through a flux of immigration and had established a foothold in Egypt in the beginning of the beginning of the 18th century BC, triggering the Second Intermediate Period of Egypt from 1782 BC-1570 BC. Between 1630-1523 BC, the Hyksos wad complete conotrol over northern Egypt, until they were vanquished by the pharaoh Ahmose I. The word Hyksos (heqa-khase) derives from the Greek phrase meaning 'Rules of Foreign Lands'.[3] The Hyksos immigrants brought introduced many technologies to the land of Egypt, including composite bows, chariots and improved metallic weapons, and the Hyksos even introduced the horse to Egypt. The capital of the Hyksos was the city of Avaris, an ancient Egyptian city discovered and excavated by Manfred Bietak. The primary deity of the Hyksos was the Egyptian storm and desert god, Seth.

The Hyksos were primarily a band of Asiatic immigrants, who, over a period of several decades, immigrated into the Egyptian lands in large numbers. When the Hyksos were entering Egypt, the Egyptians never considered them a threat, as they believed that their conquering of a foreign peoples or nation was utterly unthinkable. The Hyksos continually immigrated, especially into the port town of Avaris which began to increase in its influence through commerce, the primary population of which was of Asiatics and had a growing population because of immigration. Because of the later power that the Hyksos would wield in Egypt, later historians such as Manetho and Josephus portrayed the Hyksos as a group of warlords and invaders who conquered the land of Egypt and slaughtered its peoples through their barbaric lust, however the entering of the Hyksos into Egypt was actually very peaceful, and even economically beneficial for Egypt. The Hyksos mostly abandoned their own culture, and quickly assimilated into the culture of Egypt (with only slight modifications and changes), even adopting the worship of their deities and names.

The Rise of the Hyksos

After several decades of immigration and increasing wealth, the Hyksos began purchasing land and making contracts with the governors and peoples of Egypt, and the land they controlled continually expanded and increased, and very soon, they were able to exert political, military and economic power in Egypt, establishing Avaris as their capital.

By 1630 BC, the Hyksos took over the Egyptian capital Memphis and established the 15th Dynasty of Egypt, lasting from 1630-1523 BC, establishing themselves as the leaders and kings of Egypt in this time period. After this, the Egyptian capital became Thebes. A few of these Hyksos kings of Egypt are known today by name, including Sakir-Har, Khyan, Khamudi, and Apepi. In 1580 BC, the Egyptian pharaoh Seqenenre Tao received a message from the Hyksos king, Apepi, saying to him "Do away with the hippopotamus pool which is on the east of the city, for they prevent me sleeping day and night."[4] This message was sent because the Egyptians engaged in the practice of hippopotamus hunting, something offensive to the Hyksos, as the Hyksos incorporated the hippo with their religious observances. Seqenenre Tao viewed this request of the Hyksos as a challenge to his autonomy, and thus marched his army against the Hyksos. This ended badly however, because Seqenenre Tao was defeated and killed in this battle, forcing the Egyptian government into paying taxes to the Hyksos.

The Fall of the Hyksos

After the reign of Seqenenre Tao, his son Kamose became pharaoh of Egypt. The next Egyptian pharaoh, Kamose, had greatly complained of the Hyksos and the taxes he had to pay them, and decided to follow what his father, Seqenenre did, and also marched against the Hyksos rulers in rebellion in a massive assault. Unlike his father, Kamose completely defeated the Hyksos, so much so that he claimed that upon the marching of his army and his swift and destructive crushing of the Hyksos and their capital at Avaris, the Hyksos women became sterile. The accounts of Kamose were probably exaggerated however, as the Hyksos still maintained power over the north of Egypt after his reign. However, his son, Ahmose I further followed in the steps of his father and grandfather, and completely vanquished the remaining Hyksos power, destroyed the city of Avaris, and drove the Hyksos out of Egypt. The reign of the Hyksos would became the basis of numerous stories and legends of Egypt, and a reason of justification for the pharaohs of the New Kingdom of Egypt to begin conquering neighboring lands.