Ignaz Semmelweis (1818-1865) was a 19th century physician best remembered for his contributions in combating "childbed fever", using modern scientific methods and statistics. He became intrigued with the finding the source of the 1 in 6 mortality rate for women giving birth in his ward of Vienna's great research hospital.[1]

Until the 17th century, most births took place at home. As so-called "lying-in" hospitals became popular, more and more women came to the hospital for childbirth. These births were usually attended by midwives or doctors. With the advent of these hospitals came the increase in the phenomenon of "childbed fever", or "puerperal sepsis". This phenomenon had been described centuries before, but it was not until the 18th and 19th centuries that the disease became more widely recognized. At the time of Semmelweis's career, the germ theory of disease had not yet been formulated. Several other ideas held sway, such as that of miasmas (basically "ill winds") and "humoral imbalance". Semmelweis received the classical medical training of the time, including indoctrination into these theories, which had not substantially changed in two thousand years.

Puerperal fever is a devastating disease. Today we would simply call it "sepsis". It is caused when bacteria and bacterial toxins cause an overwhelming infection and immune reaction, often killing the patient. Even with modern antibiotics, sepsis carries a high mortality rate. During childbirth, the mother's blood stream is uniquely exposed to the environment, allowing for the ingress of bacteria. The disease would often kill up to 15-20% of mothers at lying-in hospitals. 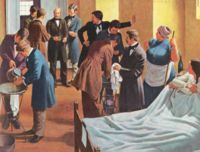 Dr. Semmelweis was not the only physician to take a special interest in the problem. In the U.S. Oliver Wendell Holmes had noted similar trends, but at the time, the U.S. was far behind Europe in medical science, and communication between American and European scientists was poor. The unique contribution of Semmelweis was that he not only observed the phenomenon of childbed fever, but he kept detailed tables of how many women were affected, where they gave birth, and who attended the birth. This was in the era that gave birth to modern statistics. At the time, most statistical techniques were primitive by modern standards, but did involve very careful data collection, allowing for modern reinterpretation of the data. What Semmelweis observed was that a much higher number of women were dying when attended on the physician and medical student ward, versus those attended by midwives.

Formulation and Testing of Hypotheses

Semmelweis developed several hypotheses to test, among them:

It was immediately and resoundingly rejected.

Semmelweis died at 47, two weeks after being committed to an asylum for the insane, and very likely as a result of injuries sustained while trying to escape. [5] He did not live to see the success of his methods. Just a few years after his untimely demise, other researchers, such as Billroth (discovery of streptococci in pus), Pasteur (discovery of strep in the blood of a septic woman), and Lister (pioneer of antisepsis in surgery) helped overturn the old order. The humoral and miasma theories of disease were gone, to be replaced by the germ theory.

Ignaz Semmelweis was one of the first scientists to use formal data collection and statistics to test a hypothesis. Statistics was in its infancy as a science, but modern statisticians have evaluated his data and confirmed his conclusions. The use of the scientific method and statistics is the basis of modern medicine.

For a more recent example of persecution of scientists using statistics to refute a scientific paradigm, see Global warming controversy.